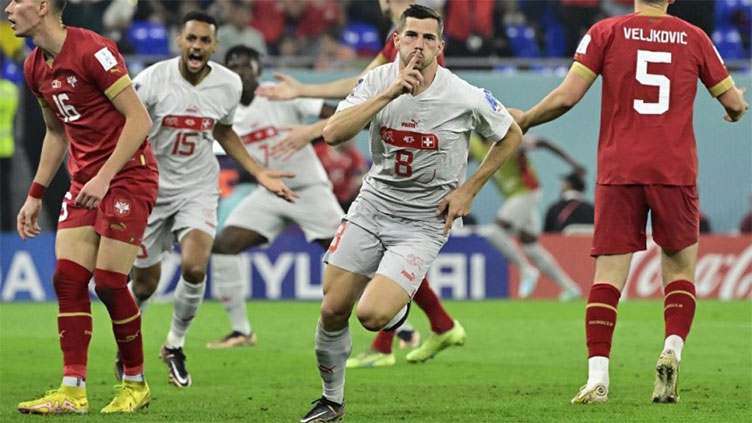 Switzerland booked a last-16 showdown with Portugal at the World Cup after a 3-2 win over Serbia.

DOHA (AFP) - Switzerland booked a last-16 showdown with Portugal at the World Cup on Friday after a 3-2 win over Serbia in a bad-tempered match secured them second place in Group G.

Xherdan Shaqiri gave the Swiss an early lead but goals from Aleksandar Mitrovic and Dusan Vlahovic in a frantic first half turned the match on its head before Breel Embolo levelled just before half-time.

Remo Freuler s brilliant goal shortly after the restart proved to be the winner, sending the Swiss through to the knockout rounds for the fourth time in five World Cups.

"It was a game where a lot of emotions were involved but in general the game was fair," said Switzerland captain Granit Xhaka.

"We wanted to focus on football and win the game and we did this. Now we re in the round of 16 and we re proud."

Bad blood marred the meeting between the teams at the 2018 tournament, when Xhaka and Shaqiri celebrated goals by making pro-Kosovo gestures that enraged the Serbs.

Tempers flared in the second half in Qatar on Friday after Serbia appealed for a penalty, with the stadium announcer calling for an end to "all discriminatory chants and gestures" around 15 minutes later.

"I can t tell you the reason why and what happened exactly," said Serbia coach Dragan Stojkovic.

"Sometimes the tensions come and some maybe bad words can create some uncomfortable behaviour, but it s nothing special. It s normal, let s say, for this kind of game."

Shaqiri missed Switzerland s 1-0 defeat to Brazil but returned with a bang, firing his side in front on 20 minutes.

Ricardo Rodriguez speared a cross into the box which was cleared straight to Djibril Sow, who laid off for Shaqiri to sweep home via the leg of Strahinja Pavlovic in front of the Serbia fans.

This time there was no double-eagle gesture. Instead, Shaqiri put his finger to his lips and pointed to the name on his shirt as a handful of bottles rained down.

Serbia hit back within minutes as Switzerland lost the ball in midfield, Dusan Tadic bending in a cross for Mitrovic to meet superbly and nod into the far corner.

Shaqiri steered wide under pressure from Pavlovic after timing his run perfectly to meet Rodriguez s raking diagonal pass, but the Swiss then paid for another lapse in concentration.

They again ceded possession and Freuler watched on in dismay as his attempted interception served only to tee up Vlahovic to roll the ball beyond goalkeeper Gregor Kobel.

But Switzerland equalised just before the break as Sow picked out Silvan Widmer in acres of space on the right and his driven low cross was turned in by Embolo.

Shaqiri clipped in a delicate ball after Embolo chased it down high up, and Ruben Vargas s cushioned backheel left Freuler to guide in from around the penalty spot.

Serbia appealed in vain for a penalty when Mitrovic theatrically fell to the ground, sparking an ugly flashpoint that led to reserve Serbia goalkeeper Predrag Rajkovic being booked.

Substitute Christian Fassnacht spurned a late chance to ease Swiss nerves when clean through on goal.

An unseemly spat between Xhaka and Nikola Milenkovic threatened to boil over, but in the end the Swiss got over the line to set up a date with Cristiano Ronaldo and Portugal.