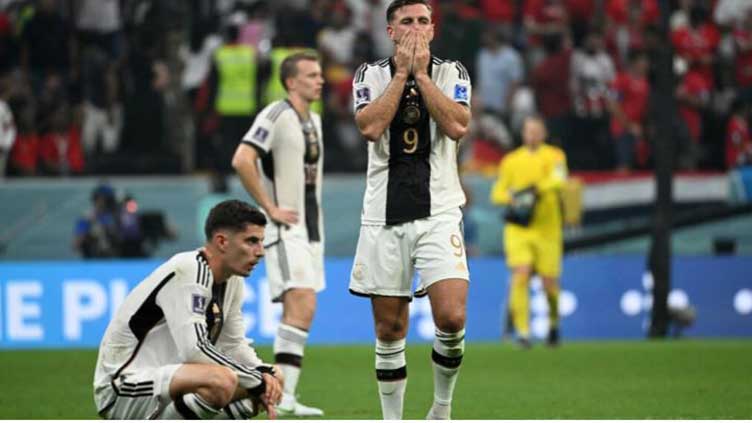 DOHA (AFP) – Perhaps the most damning indictment in the inquest into Germany s second consecutive exit from a World Cup at the group stage came from 23-year-old forward Kai Havertz, who said simply, "I don t think we re a tournament team anymore".

After Hansi Flick s team crashed out in Qatar, having never really recovered from a stunning opening 2-1 defeat to Japan, that reputation is in tatters.

Germany crashed out four years in Russia and also went out in the last 16 in last year s European Championship.

So just 18 months away from hosting the next Euros in 2024, they are in the unfamiliar position of being outsiders for a tournament held on home soil.

The 4-2 win against Costa Rica on Thursday was too little, too late. Germany needed Spain to at least draw with Japan but the Spanish went down 2-1 and Germany lost out on goal difference.

As the dejected squad boarded a plane from Doha back to Frankfurt on Friday, German Football Association (DFB) President Bernd Neuendorf refused to guarantee that Flick s job was secure, while hinting that the root cause of the problems ran much deeper.

Neuendorf announced a series of inquiries into "the development of the national team and our football since 2018".

The DFB would "look ahead" with a focus on "developing perspectives (for) the Euros in our own country."

Flick, who said on Thursday he wanted to stay in his job but knew "it isn t up to me", called for an overhaul of the junior development system.

Starkly, he recognised that Jamal Musiala, one of the few bright sparks in Qatar, "was not trained in Germany, he was trained in England". The Bayern Munich teenager represented England at youth level before switching to Germany.

End of a football nation
Germany s newspapers roundly criticised the team s performance with tabloid Bild lamenting that: "On this December 1st, 2022, we witnessed the end of a once great and proud football nation."

The lukewarm reaction to the tournament from German fans should also concern German football administrators.

The team s backtracking on the planned "OneLove" rainbow armband, designed as a protest at Qatar s laws on homosexuality, went down badly at home.

An average of 14.7 million tuned in to watch the three games -- well down on the 25 million four years ago.

The German public has not fallen out of love with football completely -- 17.9 million tuned in to see Germany s 2-1 loss to England in the women s Euros in July.

National set-up director Oliver Bierhoff, who scored two goals in the Euro 1996 final when Germany last won the tournament, lamented the wastefulness in front of goal.

The side "lacked the German efficiency that we ve always had", Bierhoff said.

Jurgen Klinsmann, a 1990 World Cup winner and former Germany coach, said the side "didn t deserve to go through" while recognising the short turnaround to the 2024 Euros "may be a good thing, helping them to re-focus quickly".

Another World Cup winner, Bastian Schweinsteiger, slammed the side s poor defence, highlighting that Germany has not kept a clean sheet at the World Cup since the 2014 final it gloriously won in Rio de Janeiro.

Captain Manuel Neuer, 36, said "today we did everything that was asked of us", while striker Niclas Fuellkrug said Germany was eliminated "because we fell asleep a little bit against Japan."

Joshua Kimmich hinted at deeper problems, saying "we can t always talk about bad luck" while Real Madrid defender Antonio Ruediger insisted the "hard reality we find ourselves in" was to do more with attitude than talent.

The once steely masters of tournament football had, he said, become "a very, very friendly team".