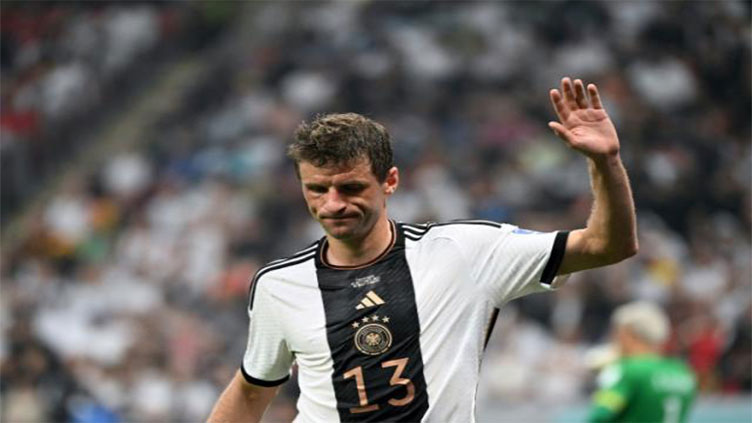 The Germans beat Costa Rica 4-2 but Spain slumped to a 2-1 defeat to Japan on Thursday that meant Germany finished third in Group E behind Spain, with the teams equal on four points and the positions decided only by goal difference.

"It is unbelievably bitter for us because our result would have been enough," Mueller said.

"It s a feeling of powerlessness."

Mueller was part of the 2014 World Cup-winning team and was also in the side that was eliminated at the same stage four years ago in Russia.

Havertz said the fact Germany only discovered their fate Thursday when the result of the game between Japan and Spain was displayed on the stadium s big screen made it even more difficult.

"When it happens this way, it feels like watching like a horror movie," said Havertz, who scored two goals after coming off the bench.

"We learned during the match that Japan were leading, and then the group standings were displayed in the stadium. We still had a little hope that Spain would score.

"But then we noticed that the Japan match was over."

Havertz blamed the team s performance against Japan for their elimination and hinted that all was not well in German football.

"When you go out twice in the first round and once in the round of 16, it s extremely bitter," he said.

"We have to be honest and say that for four years, everything hasn t been going well.

"Now we ve been knocked out twice in the group stage. I don t think we re a tournament team anymore."

Coach Hansi Flick, who is under contract until Euro 2024 which will be held in Germany, said he had no plans to step down but admitted "it won t be up to me".

"From my side, there is no reason not to continue," he added.

"I enjoy it, we have good players coming through."

Flick called for urgent changes to Germany s football youth development and said they needed to look to other countries for ways to improve.

"We have players who play with top clubs and we do have the quality (but) I believe that for the future of German football, we need to do things differently in training," said Flick.

"It will be very important to focus on the new generation of footballers.

"There are good players for the future, but for the next ten years, it is very important that we make the right steps now."