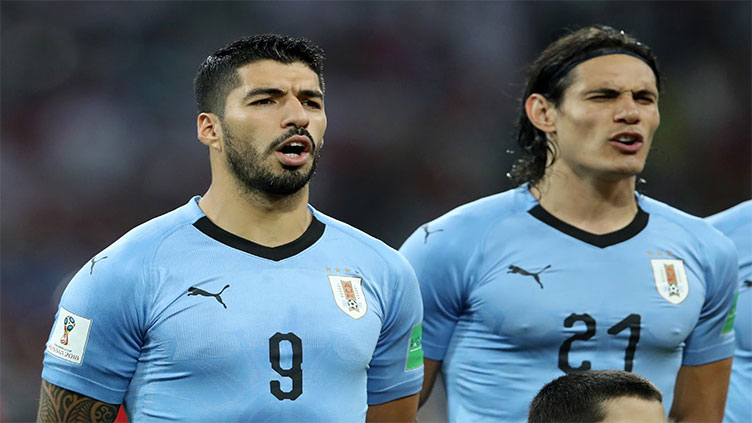 Suarez and Cavani, both 35, have already said this will be their last World Cup.

DOHA (AFP) - Star Uruguayan forwards Luis Suarez and Edinson Cavani face the ignominy of crashing out of the World Cup with a whimper but it is coach Diego Alonso who is taking the flak back home.

With Cristiano Ronaldo and Lionel Messi soaking up the limelight at what is likely to be their last World Cup, Uruguay s two veterans have flown under the radar.

Suarez and Cavani, both 35, have already said this will be their last World Cup and after a drab 0-0 draw with South Korea and a 2-0 defeat to Portugal, Friday s final Group H clash with Ghana could be their final act on the biggest stage.

While not mentioned in the same breath as Ronaldo and Messi, Suarez and Cavani are nonetheless two of the greatest forwards of their generation.

They occupy the top two spots on Uruguay s all-time record scorers  list, with Suarez as number one, and were part of the teams that reached the World Cup semi-finals in 2010 before winning the Copa America the following year.

But while Messi scored in Argentina s 2-0 victory over Mexico in Qatar and Ronaldo made history as the first player to score in five World Cups, the Uruguayan pair have been a huge disappointment.

Suarez started against South Korea and barely had a kick before he was replaced by Cavani in the second half.

The roles were reversed against Portugal, and although they both had a single chance they each failed to get it on target.

But in Uruguay the focus has not been on the veteran strikers. Instead it is Alonso who has been subjected to critical scrutiny.

Following the Portugal defeat he was asked about his perceived negative tactics in Qatar, being unfavourably compared to his previous more expansive style that helped Uruguay win their final four qualifiers to book their ticket to Doha.

"We have not stopped doing it (attacking) but the opposition are also playing," said Alonso.

"That doesn t mean that we don t want to try. Sometimes your opponents are also competing, playing well and preventing you from getting into the positions you want."

In their first mach in Qatar, against the Koreans, Uruguay failed to muster a single shot on target, although they did hit the woodwork twice.

Against Portugal, they struggled to get hold of the ball in the first half, although they hit the post through Maxi Gomez after the break.

"Uruguay did not lose because of Diego Alonso s 3-5-2 formation," said sports newspaper Ovacion. "But it would have been very difficult to win playing like this."

There are also rumours of discord within the ranks after Cavani gave a terse and suggestive reply to a question about what was happening with Uruguay.

"You have to ask Alonso this," he said. "He will be able to tell you more about the tactics."

Cavani appeared unimpressed when his number came up against Portugal, with Uruguay a goal down and needing to chase the game.

Some commentators have acknowledged the limitations of the two 35-year-olds but still are not pointing the finger at them for Uruguay s failures.

"The sharp shooter (Suarez) is not the same as before. The years are passing, and he s not that player that chased every ball and always won challenges with defenders," said Uruguayan newspaper El Observador after the team s first match.

The fault, said the newspaper, lay with those meant to create the chances.

"In the second half Cavani came on, but it was more of the same, because without support he didn t have any chances."

Unless either can roll back the years against Ghana, the careers of two of Uruguay s greatest players could end in anti-climax.