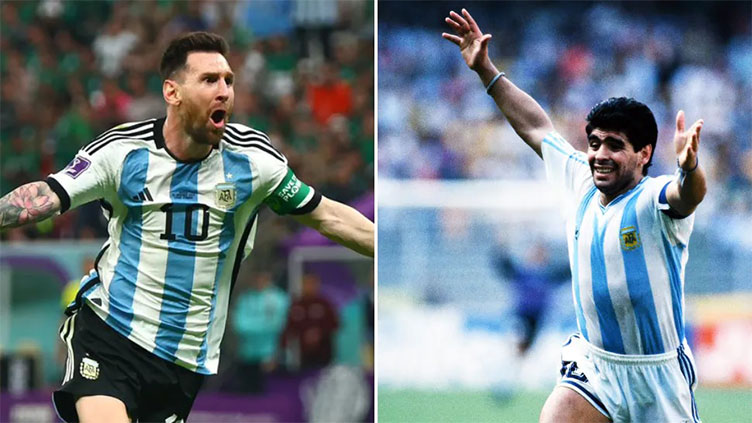 Messi believes Maradona would be "super happy" after he led Argentina into the World Cup last 16.

DOHA (AFP) - Lionel Messi believes Diego Maradona would be "super happy" after he led Argentina into the World Cup last 16 on Wednesday thanks to a 2-0 win over Poland.

Messi became his country s most capped player at the tournament with a 22nd appearance surpassing his legendary compatriot who died just over two years ago.

"I learned it recently, I didn t know it. It s a pleasure to be able to continue to achieve these kinds of records. I think Diego would be super happy for me, because he always showed me a lot of affection, he was always happy when things went well for me," said Messi.

Despite missing a penalty -- his 39th career failure from the spot -- the Argentina captain said he was "happy" with this "big match".

"We achieved our first objective, which was to get out of the group after starting the way we did (a shock 2-1 loss against Saudi Arabia)," said Messi.

"I was really frustrated to have missed the penalty, because I knew that a goal could change the whole match, that it makes you play in a different way. But I think that from the penalty I missed, the team came out stronger."

Messi, who still needs a World Cup winner s medal to cement his legacy as one of the sport s greatest players, believes Argentina are moving up through the gears at precisely the right time.

"After the first goal, everything went our way. We started doing again what we had been trying to do since the start of the World Cup, but which we hadn t been able to achieve for various reasons.

"Having been able to do it today, it gives us confidence for the future."

Next up for Argentina is a last-16 clash against Australia on Saturday.

"We know that now everything will be very difficult. That whoever the opponent, it will be complicated. We have seen recently, at our own expense, that any opponent can play a good game and win."