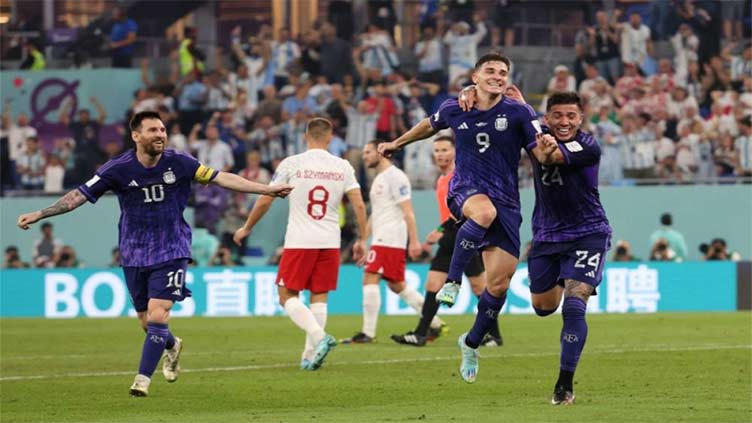 Argentina advanced to the last 16 of the World Cup after a 2-0 victory over Poland.

DOHA (AFP) - Lionel Messi had a penalty saved but Argentina still advanced to the last 16 of the World Cup as Group C winners after a 2-0 victory over Poland on Wednesday.

Poland also went through as runners-up although a 2-1 win for Mexico over Saudi Arabia in the group s other game meant Czeslaw Michniewicz s side advanced only on goal difference.

Messi said Argentina s 2-0 win over Mexico in their previous match had given them "serenity" and looked forward to a last-16 match-up with Australia.

"We went out there thinking we had to win," said Messi.

"The game against Australia will be difficult -- anyone can beat anyone. It s very even, we have to prepare for the game in the best way, as always."

Argentina had been unable to find a way past Wojciech Szczesny in an opening 45 minutes in which the Poland goalkeeper saved his second penalty of the tournament.

Szczesny was adjudged to have fouled Messi while stretching to reach a cross, but he dived to his left to beat away the resulting spot-kick.

It was the 31st penalty Messi had failed to convert in his career.

"I m angry at missing that penalty but the team came out stronger after my mistake," he said.

"We knew that once the first goal went in it would change the game."

Instead it was left to Szczesny to take centre stage for the Poles, denying Messi with two crucial early stops.

First Messi wriggled clear of a pack of defenders before producing a shot that flew straight at the keeper.

Then he found space to charge into the Polish box down the left, forcing Szczesny to make a save at his near post.

Argentina continued to create the better chances in the first half and Marcos Acuna flashed a shot wide after Alvarez had also gone close to breaking the deadlock.

Szczesny had to scramble to stop Angel di Maria scoring direct from a corner, before the goalkeeper was again called into action to deny Alvarez.

Szczesny outdid himself when he dived to his left to stop Messi s penalty in the 39th minute.

He still had more to do before the half-time whistle, punching away a shot from Alvarez before saving the follow-up from Rodrigo de Paul.

There was nothing he could do when Mac Allister broke the deadlock less than a minute after the interval.

Nahuel Molina charged down the right, then cut the ball back for Mac Allister to drill just beyond Szczesny s reach.

The goal forced Poland to show some belated attacking ambition and Kamil Glik headed just wide from a free-kick almost immediately after the restart.

Argentina continued to go in search of more goals and Alvarez scored their second after combining well with Enzo Fernandez.

Fernandez, making his first start for Argentina, picked out his team-mate, who held off a defender before lashing the ball past Szczesny.

"We were trying to score the whole time and I think we re back to being the team we used to be," said Mac Allister.

"We controlled the ball more, we were calm and we didn t get desperate. We played a great match."

Poland were still walking a tightrope with yellow cards potentially crucial to their chances of reaching the last 16.

Grzegorz Krychowiak went into the book in the 83rd minute but a late goal for Saudi Arabia against Mexico saw the Poles safely through on goal difference.

"It was not a match for a striker but I knew it would be like this," Lewandowski said.

"For me, for the Poland team, given the possibilities we have, it was a success.

"No-one will remember what this match was like -- we will just be getting ready for France."