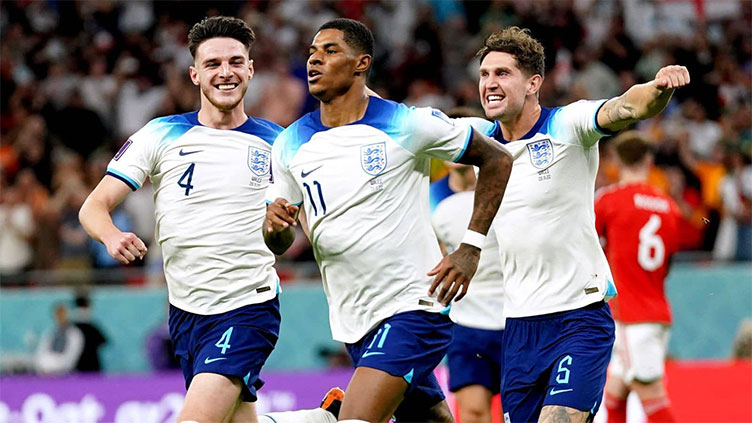 DOHA (AFP) - England booked a World Cup last 16 clash against Senegal as Marcus Rashford and Phil Foden inspired a 3-0 win against Wales that sent their neighbours crashing out of the tournament on Tuesday.

Gareth Southgate s side sealed first place in Group B thanks to key contributions from Rashford and Foden after they were restored to the team by the England boss.

Foden showed why there has been such a clamour for him to start as he won the free-kick that Rashford converted to break the deadlock early in the second half at the Ahmad bin Ali Stadium in Doha.

With Foden and Rashford providing the cutting edge so lacking in their previous match -- a dour goalless draw against the United States -- England won for just the second time in their last nine games.

A spluttering first half showed the Three Lions still have room for improvement as they chase a first major trophy since the 1966 World Cup.

But the ruthless way they demolished Wales after the break provided encouragement ahead of Sunday s showdown with Group A runners-up Senegal.

"I thought we had complete control in the first half but didn t create enough clear chances. We just felt that by swapping the wingers  positions we could get the option of them coming in off the line. Phil did that really well for the free-kick," Southgate said.

"You need goals from all areas. Of course it s a problem for opposition teams if the threat is coming from other areas."

While England fans regard Germany and Scotland as their main rivals, Wales have never hidden how much they enjoy getting one over on their hated neighbours.

The Wales squad were famously filmed celebrating England s embarrassing Euro 2016 exit against Iceland, while Welsh striker Kieffer Moore recently said he would love to knock the English out of the World Cup.

With those slights in mind, condemning Wales to elimination was a welcome bonus for England.

But more importantly they eased the angst that had mounted since they were booed off after the lethargic United States stalemate that followed their 6-2 rout of Iran in the group opener.

Wales manager Rob Page said: "We ve got to put things in perspective. We haven t got the players that England have. It s an amazing achievement to be here.

Rashford, one of four changes by Southgate, had a golden opportunity to give England an early lead when he surged onto Harry Kane s pass, but he took too long to shoot and Danny Ward raced off his line to save.

Unable to lay a glove on England, Wales barely made it out of their own half as Southgate s men monopolised possession for long spells without producing the breakthrough.

Criticised for his performance in the defeat against Iran, Wales captain Gareth Bale substituted at half-time with a hamstring problem.

Southgate had said he was concerned about Foden feeling under pressure to deliver after the calls for him to be selected, but he didn t need to worry after the precocious Manchester City playmaker.

Foden was the catalyst for England s opener as he drove forward to win a 50th minute free-kick that Rashford brilliantly curled into the far corner of Ward s goal from 25 yards.

Moore tried to rescue Wales with dipping effort that Jordan Pickford saved well, but Rashford delivered the knockout blow with his third goal of the tournament in the 68th minute.

Kalvin Phillips  long pass sent Rashford scampering down the right flank and, with the hapless Wales defence backing off, the Manchester United forward cut inside before planting a low shot through Ward s legs.