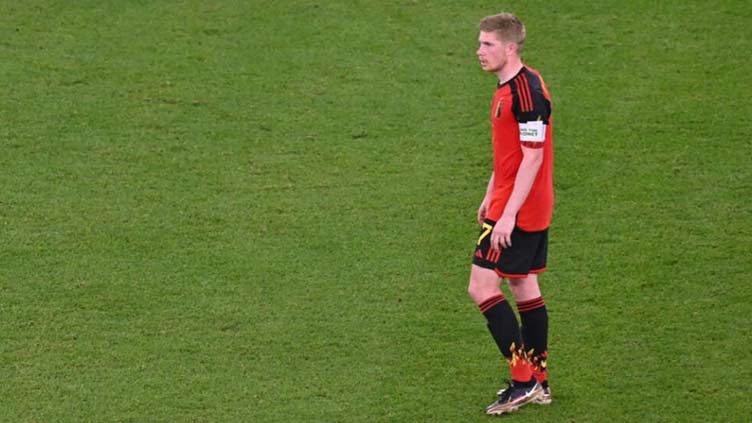 Doha (AFP) – Belgium s much vaunted team have one last chance to extend their final World Cup together this week after crashing to defeat by Morocco, with coach Roberto Martinez and his players under mounting pressure.

Anything other than victory against Croatia on Thursday could see the world s second-ranked side heading home after the group stage.

Kevin De Bruyne said in an interview with The Guardian before the 2-0 loss to Morocco that his team was "too old" and had "no chance" of winning the World Cup.

Martinez insisted after the game that it might have been a "double bluff" from the Manchester City star, but if he was being serious, it would have been hard to disagree based on their performances in Qatar so far.

Spaniard Martinez has largely stuck by the experienced players who have reached at least the quarter-finals at each of the past four major tournaments.

In the game against Morocco and the fortunate 1-0 win over Canada, Belgium were overran, outpaced and offered no real threat going forward.

The absence of record goalscorer Romelu Lukaku through injury has been a blow, but even his introduction late on against Morocco was born of desperation and the Inter Milan man offered very little.

The last six years have provided the best spell of sustained success in Belgium s history, with the third-place finish at the 2018 World Cup in Russia the closest the current team have come to lifting a major title.

Ten of the 14 players who featured in the semi-final loss to eventual winners France four years ago are still in the squad.

The Red Devils  attacking style of play has vanished after cruising through qualifying unbeaten.

The Belgian press has been extremely critical of the team, with website HLN saying "there must be new blood".

Martinez believes that being in a last chance saloon will bring the best out of his ageing team.

"In the last game we have to play to win it and as if we have nothing to lose," he said.

"If we win against Croatia we re (still) in the World Cup and that s a big motivation."

On the eve of the Morocco defeat, Hazard also said he thought Belgium s best chance of becoming world champions had been and gone.

There have been rumours of disharmony in the squad, with Vertonghen appearing to sarcastically hit out at the 31-year-old De Bruyne s comments.

"A lot of things go through my mind now, but those are things that are best not said on camera," he told broadcaster TV Sporza.

"Maybe also we attack badly because the guys (forwards) are too old."

Martinez admitted his players were playing "without joy" and with a "fear of losing", but he has left many bright, younger talents sitting on the bench.

Brighton s Leandro Trossard, who has scored seven goals for Brighton in the Premier League this season, featured only as a second-half substitute against Canada and Morocco.

Hazard started both games, but is a shadow of the player he was before he left Chelsea for Real Madrid in 2019.

Veterans Vertonghen and Alderweireld, now playing their club football back home with Anderlecht and Antwerp respectively, have been preferred to in-form Leicester centre-back Wout Faes and Rennes  Arthur Theate.

The 33-year-old Witsel has struggled in both matches, but the younger legs of Youri Tielemans and Amadou Onana have yet to be united in midfield.

Martinez has indicated he will not make wholesale changes and said he only withdrew Hazard on the hour mark on Sunday -- for the 35-year-old Dries Mertens -- to keep him fresh for challenges to come.

Lose on Thursday, though, and it would be the end of an era for Belgian football.