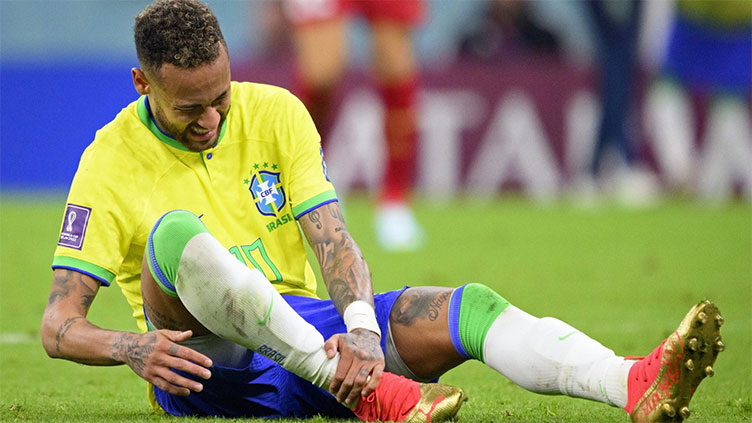 Brazil must do without injured star forward Neymar against Switzerland at the World Cup.

DOHA (AFP) - Brazil must do without injured star forward Neymar against Switzerland at the World Cup on Monday as Cristiano Ronaldo looks to lead Portugal into the last 16 in Qatar.

Five-time world champions Brazil could secure a spot in the knockout phase with a win over the Swiss depending on the outcome of the day s early game between Serbia and Cameroon.

Brazil kicked off their campaign in Qatar with a 2-0 victory over Serbia in Group G but Neymar limped off with a sprained ankle.

"At the time it was difficult for him and after the game he was sad which I think is normal given how much he has dreamt of this," said Brazil centre-back Marquinhos.

"Now, after the tests and the treatment, he is doing physiotherapy 24 hours a day which shows how much he wants to be back with us.

"We don t know when, but we hope it s as soon as possible."

Ronaldo became the first man to score in five World Cups after converting a disputed penalty in Portugal s opening 3-2 victory over Ghana in Group H.

The Portuguese will qualify for the second round if they beat Uruguay at the Lusail Stadium, which will host the final on December 18.

Danilo Pereira has been ruled out of the rest of the group stage after fracturing three ribs in training, meaning 39-year-old Pepe is likely to start in defence.

It would make him the second oldest outfield player ever to appear in a World Cup match, after Cameroon great Roger Milla.

Cameroon lost to Switzerland in their first game so will attempt to bounce back against Serbia, who are being investigated by FIFA after the team hung a controversial flag depicting Kosovo in their changing room before their loss to Brazil.

South Korea coach Paulo Bento says the team will see a "different" Son Heung-min against Ghana after the forward got used to his protective face mask during their 0-0 draw with Uruguay.

Before coming to Qatar, Son had surgery to repair a fracture around his left eye he suffered while playing for Tottenham Hotspur earlier this month.

"First he needed to feel at ease with his teammates and afterwards with the opponents. The second game will be different," said Bento.

Germany gave themselves a chance of qualifying for the last 16 after substitute Niclas Fuellkrug snatched a late equaliser to earn a 1-1 draw with Spain on Sunday.

Alvaro Morata had put Spain ahead in the 62nd minute of a tense meeting at Al Bayt Stadium between the winners of two of the last three World Cups.

After crashing to a shock defeat to Japan in their first game, Germany must have woken up on Sunday with fears of a second consecutive group-stage exit looming in their minds.

But even before they held Spain, the Germans were helped by Costa Rica, who bounced back from a 7-0 drubbing by Spain to beat Japan 1-0. Defender Keysher Fuller scored the only goal in the 81st minute.

It means Group E is finely poised. Germany can go through if they beat the Costa Ricans on Thursday and Spain avoid defeat to Japan.

"The important thing is we are still alive," said Germany captain Manuel Neuer.

Belgium s hopes of qualifying from Group F took a severe blow as they suffered a surprise 2-0 loss to Morocco.

A victory for Belgium would have sent them into the knockout phase but Romain Saiss and Zakaria Aboukhlal s late goals instead secured Morocco s first World Cup win in 24 years.

"We re not playing with joy. It s maybe the weight on our shoulders," said Belgium coach Roberto Martinez.

In Sunday s other Group F game, Croatia went behind to Canada when Alphonso Davies scored after just two minutes before the 2018 beaten finalists romped to a 4-1 win.

Croatia now need just a draw with Belgium in their final group game on Thursday to reach the last 16, but the Belgians have to beat them to be sure of going through.

Morocco will be confident of taking a point from Canada to reach the second phase for the first time since 1986, while the eliminated Canadians will be playing just for pride.