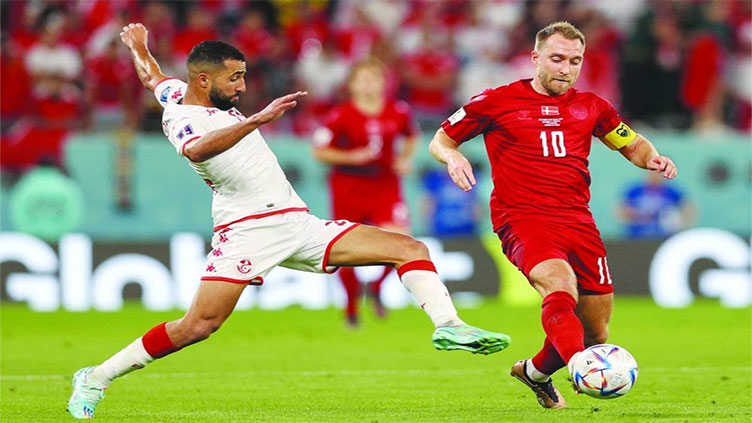 Tunisia held Denmark to a goalless draw in their World Cup opener on Tuesday.

DOHA (AFP) - Tunisia held Denmark to a goalless draw in their World Cup opener on Tuesday, kicking off their Group D campaign with a strong performance against one of the pre-tournament dark horses.

Tunisia have never reached the World Cup knockouts in five previous attempts but Jalel Kadri s side will be encouraged both with a point at Education City Stadium and with how they performed against the fancied Danes.

Since Kadri took charge of the team in January Tunisia have only lost to Brazil and they frustrated Denmark in front of thousands of noisy North Africans.

Christian Eriksen was largely anonymous on his return to major tournament football after nearly dying on the pitch at the European Championship last year, wilting in the face of ferocious defending.

Denmark had come into the match as favourites but Tunisia tore into their more illustrious opponents from kick-off, flying into tackles.

The massed ranks of Tunisians in the stands created a crackling atmosphere and they cheered every tackle and clearance.

The African side nearly took the lead in the 11th minute, with Mohamed Drager s long-range effort clipping off Andreas Christensen and drifting just wide.

The Danes began to get a foothold in the game but talisman Eriksen struggled to shake off the attentions of Tunisia s well-organised backline, and although they got into dangerous positions any attacks were comfortably snuffed out.

The Tunisians came closest to taking the lead in the opening period, Copenhagen-born Anis Ben Slimane straying offside before slotting past Kasper Schmeichel, who then made sure the scores were level at the break with a wonderful stop.

Issam Jebali managed to break through onto Youssef Msakni s smart pass but his dinked finish was brilliantly tipped away by the onrushing Schmeichel.

Tunisia kept up the intensity but it was Denmark who had the two best chances of a tight second half.

Eriksen was denied what would have been a fine goal by Aymen Dahmen s fingertip save in the 69th minute and from the subsequent corner substitute Andreas Cornelius somehow headed onto the post from close range.

That would have probably won the match for Denmark as Tunisia failed to match their physical efforts with much real creativity.

After surviving a late penalty scare they celebrated a precious and unexpected point with their passionate supporters.