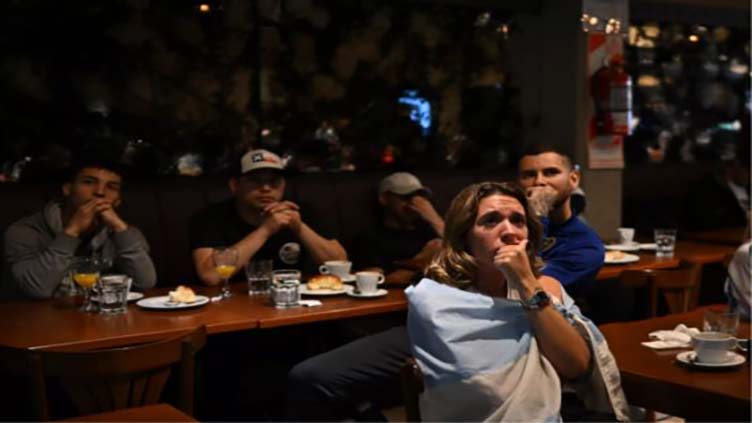 BUENOS AIRES (AFP) – Gasps gave way to stony expressions of disbelief, and then tears, as Argentina fans gathered in Buenos Aires watched the humiliation of their football team unfold at the World Cup in Qatar.

"It was a walloping, a bucket of ice-cold water," Carlos Cuera, 26, said of the 2-1 loss to Saudi Arabia. He was still seated in front of a cafe television where fans decked out in their team s white and blue colors gathered from before 7:00am for the breakfast match in the Argentine capital.

"Nobody expected this. We thought the first three matches would be an easy victory, and now it has become more complicated," he said, adding the loss had ramped up pressure ahead of Saturday s duel with Mexico.

Lionel Messi s Argentina side suffered one of the greatest upsets in World Cup history, ending a winning streak that included the Copa America championship.

The proud, football-crazed nation entered the World Cup among the favorites, eight years after they last won the tournament.

Buenos Aires quickly resumed its normal hustle and bustle, as desolate fans headed into the office.

In central Corrientes street, not far from the city s towering Obelisk, one cafe had set up a screen on the sidewalk, prompting delivery men, taxis, and even bus drivers to slow as they passed -- hoping for another goal.

The day started better than it ended. Fans leaped from their chairs, screaming with joy, when Messi scored a goal off a penalty 10 minutes into the game.

"I feel very sad, really. The game started so euphoric with so much desire to win, and suddenly the game turned around," said Pilates instructor Lena Widgren, 50, who said she didn t know much about football, but it was about "the emotion of being Argentine, of going out to celebrate."

Then fans joined in a cascade of insults when three goals were canceled for being offside -- two by VAR, or video assistant referee. Fan Norberto Protzmann told AFP he sat in "terror" during the second half.

"We underestimated them a little too much and they dominated us in the second half.

"The players were too confident, whereas the rival team put their lives into each move, because they knew they were facing a great team. And it worked well for them."

Gustavo Leal, 75, complained about the VAR, saying, "football with technology is no longer football. This World Cup needs (Diego) Maradona," referring to the legendary player who died in 2020.

But he remained optimistic.

"The first match is as hard as the last. I trust him," he said of coach Lionel Scaloni, adding he was a "measured guy who knows how to lead the team."

Now, all eyes are on Saturday s game against Mexico, to see whether the team can turn their fortunes around.

"Mexico is a very difficult team and it has always been difficult for Argentina," said Protzmann.

"If we don t put our lives into each play, we won t win, especially against Mexico."