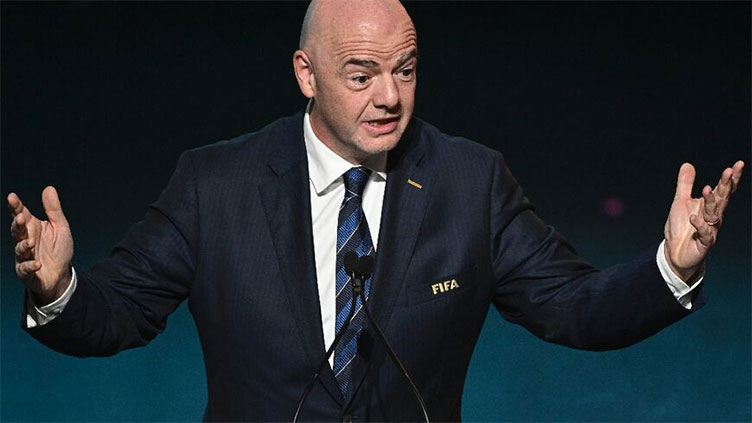 The president of the world football body called on Tuesday for a one-month ceasefire in Ukraine.

NUSA DUA (Reuters) - The president of the world football body called on Tuesday (Nov 15) for a one-month ceasefire in Ukraine to mark the World Cup, saying sport could bring people together.

FIFA president Gianni Infantino, addressing leaders of the Group of 20 major economies gathered in Bali, said the World Cup opening Sunday in Qatar could serve as a "positive trigger" in the nearly nine-month Russian invasion of Ukraine.

"My plea to all of you is to think of a temporary ceasefire for one month for the duration of the World Cup," he told a G20 lunch for the leaders.

If not a full ceasefire, there can be "the implementation of some humanitarian corridors or anything that could lead to the resumption of dialogue", he said.

Describing football as a unifier, he pointed out that Russia had hosted the 2018 World Cup and that Ukraine is submitting a joint bid with Spain and Portugal for 2030.

"We are not naive to believe that football can solve the world s problems," Infantino said.

But the World Cup offered a "unique platform", he said, as an estimated 5 billion people - more than half of humanity - are expected to watch on television.

"Let s take this opportunity to do everything we can to start putting an end to all conflicts," he said.

The G20 talks included President Joe Biden and Russian Foreign Minister Sergei Lavrov although it was not immediately clear if they were listening to Infantino, who later asked leaders to sign a souvenir football.

The 2022 World Cup, the first to take place in the Middle East, has already been full of controversy, including over Qatar s alleged human rights abuses, suppression of dissent, mistreatment of foreign workers and persecution of LGBTQ people.

Infantino defended the track record of the World Cup, saying that "hundreds of thousands of workers enjoy better conditions than some years ago".

Qatar has accused its critics of racism and said that it was already handing out hundreds of millions of dollars for unpaid wages.

As part of reforms, the gas-rich kingdom has ended its much-criticised system in which labourers could not change jobs or leave the country without permission from their employer.