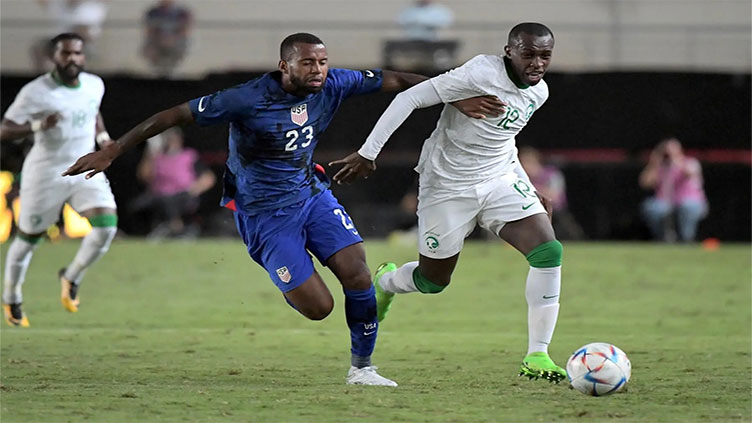 United States wrapped up their World Cup preparations with a 0-0 draw against Saudi Arabia.

MURCIA (AFP) - The United States wrapped up their World Cup preparations with a 0-0 draw against Saudi Arabia on Tuesday.

A low-key friendly between the two World Cup qualified nations played in a virtually empty stadium in Murcia, southern Spain, saw Saudi Arabia carve out the better chances only to be denied by the USA s Arsenal goalkeeper Matt Turner.

United States coach Gregg Berhalter had called on his team to show "personality" after being outplayed in a comprehensive 2-0 defeat to Japan in Germany last Friday.

But once again the US struggled to build attacking momentum against the Saudis, who finished above Japan in their successful World Cup qualifying campaign.

The draw means the USA will head to the World Cup short on confidence as they prepare to face Wales, England and Iran in the first round group stage.

Saudi Arabia, who face Argentina, Poland and Mexico in the first round in Qatar, almost took the lead after just 25 seconds when Sultan Al-Ghanam shot from outside the area to force a good save from Turner.

The US were limited to a handful of half-chances during the opening 45 minutes but despite the return of Chelsea s Christian Pulisic were mostly ineffective in front of goal.

Saudi Arabia meanwhile should have scored in the 33rd minute, but Hattan Bahebri took too long to get a shot off from close range and saw his effort blocked by a desperate lunge from US defender Walker Zimmerman.

That was as good as it got for the US, however, and the Americans had the ever alert Turner to be thankful for 20 minutes from time when the goalkeeper saved smartly from Asiri Haitham s rasping shot.