Serena makes winning return in Eastbourne doubles after year out 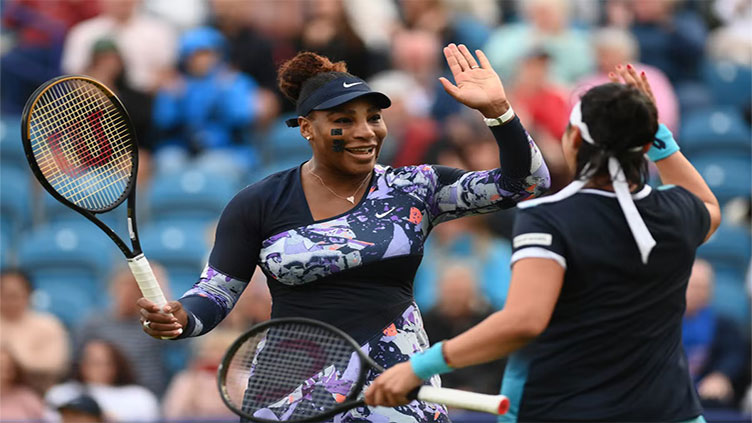 Serena makes winning return in Eastbourne doubles after year out

EASTBOURNE (AFP) - Serena Williams made a winning comeback after a year on the sidelines as the American legend teamed with Ons Jabeur to beat Sara Sorribes Tormo and Marie Bouzkova 2-6, 6-3, 13-11 in the Eastbourne International doubles on Tuesday.

Williams, a 23-time Grand Slam singles champion, was back in action for the first time since she made a tearful exit from Wimbledon last year.

The 40-year-old suffered a leg injury during her Wimbledon first round match against Aliaksandra Sasnovich and had not been seen on court since.

Before Williams made the surprise announcement of her return last week, rumours of retirement had swirled around her for several months.

But, with Wimbledon starting on June 27, Williams finally resumed her career, playing with Jabeur at the Wimbledon warm-up event by the Sussex seaside.

Williams and Tunisia s Jabeur, who is third in the WTA singles rankings, saw off Spain s Sorribes Tormo and Bouzkova of the Czech Republic in the last-16 tie.

Although Williams was far from her vintage best, she will be encouraged by her first outing for 12 months.

She and Jabeur will face Japan s Shuko Aoyama and Taiwan s Chan Hao-ching in the quarter-finals.

"It was so fun to play with Ons. We had a lot of fun and our opponents played amazing. We were happy to stay in there," Williams said.

"I called Ons, she has been playing so well and I knew I needed to play some matches and she has always been so nice to me on tour.

"Yeah, I caught some fire behind me, it was good."

Serena has been given a wildcard to play in the singles at Wimbledon as she restarts her history bid.

Williams is one Grand Slam crown away from equalling Australian Margaret Court s record of 24 singles titles at the majors.

The last of Williams  23 Grand Slam singles titles came at the Australian Open in 2017.

Since then she has lost four Grand Slam finals, including at Wimbledon in 2018 and 2019.

Williams won the seventh and most recent of her seven Wimbledon singles titles in 2016.

Serena, who became a mother in 2017, has plummeted to 1,204th in the WTA rankings due to her period out of action.

Wimbledon is widely considered Williams  best chance of winning another Grand Slam and this was her first step towards that goal.

After so long away, Serena soaked up the applause during a raucous reception from the crowd when she walked onto court in the early evening sunshine.

Williams  husband Alexis Ohanian was watching from the stands as his wife made an understandably rusty start.

Serena was appearing in doubles competition on grass for the first time since 2016, when she won Wimbledon with her sister Venus.

The 14-time Grand Slam doubles champion was well short of peak form and Bouzkova and Sorribes Tormo twice led by a break at the start of the second set.

But Williams showed the tenacious spirit that has defined her career, striking the ball cleaner and crisper as she and Jabeur hit back to level the match at one-set all.

In the match-deciding tie-break, Serena squandered a match point on her serve with a wayward forehand at 9-8 and Jabeur wasted another at 10-9.

But the pair saved a match point from Bouzkova and Sorribes Tormo at 10-11, reeling off the last three points to clinch a dramatic victory in the dusk.