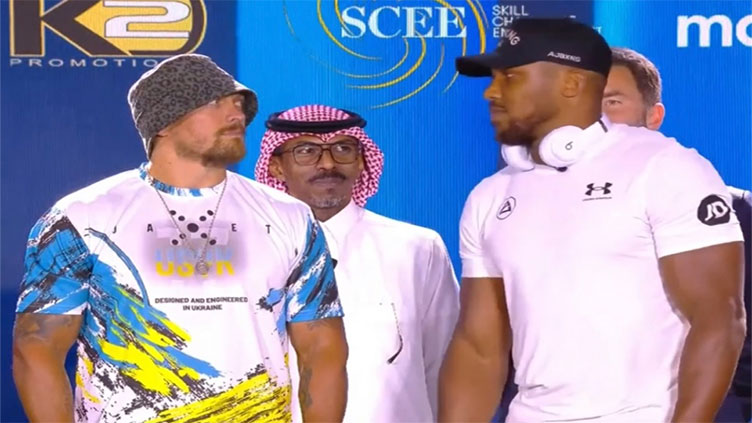 The August 20 "Rage on the Red Sea" in Jeddah will be the second fight in Saudi Arabia for Joshua.

JEDDAH (AFP) - Anthony Joshua promised to stick to a simple gameplan on Tuesday when he tries to wrest back his world heavyweight titles from Ukraine s Oleksandr Usyk in Saudi Arabia.

The towering Joshua lost by unanimous decision last September in London to Usyk, who returned home to fight the Russian invasion before being given a special exemption from military duty.

The August 20 "Rage on the Red Sea" in Jeddah will be the second fight in Saudi Arabia for Joshua, 32, who avenged a shock loss to Andy Ruiz Jr in Riyadh in December 2019.

It is latest in a series of high-profile Saudi events which have drawn accusations of "sportswashing", or detracting attention from the country s human rights record.

"The fight with Usyk, he bust my arse for some rounds. I had to take that defeat like a man," Joshua, wearing white headphones around his neck, told a press conference in Jeddah.

"But I hold myself accountable. I m someone who can admit when I m wrong and hold my head high.

"I don t like to overcomplicate the situation, because there s genius in simplicity.

"Sometimes if you keep things simple, you can achieve great things."

The two fighters faced off in a long stare-down for the cameras after the press conference, where Saudi officials talked up their commitment to grassroots boxing and developing the sport.

Usyk, 35, face partially hidden by a bucket hat with a Ukrainian flag, referenced the turmoil at home but said he preferred to let his fighting do the talking.

"As we all know we are not in the best conditions at the moment back at home. But we are doing what we have to do. We are doing our job and we are working hard to achieve our goals," he said.

Joshua has made changes to his coaching staff as he bids to be crowned world heavyweight champion for a third time, adding Robert Garcia added to his corner to work alongside Angel Fernandez.

"Alex is a great fighter -- he s got the strength, he s got reflexes, he s got accuracy, he s got everything. But Anthony has got all the tools to beat him," said Garcia.