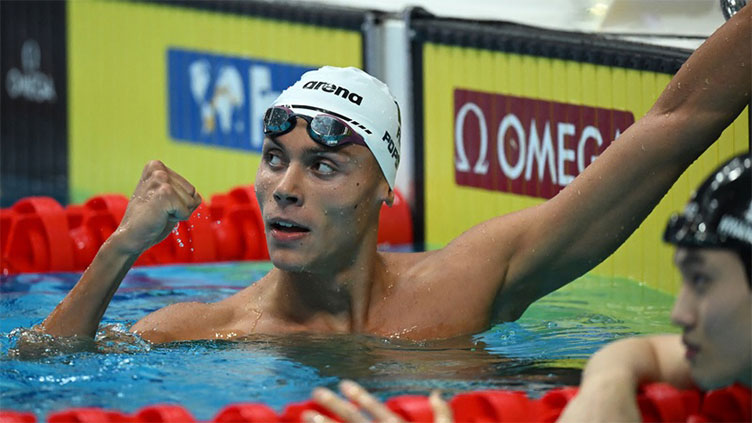 BUDAPEST (AFP) - A teenage prince grabbed his first title, while a veteran queen of swimming reclaimed her throne in the first two finals in the World Championships on Monday in Budapest.

Katie Ledecky, who reclaimed the 1,500m women s freestyle title, finishing almost 15 seconds ahead of her closest pursuer, said her approach was similar.

"I was having a good one, the goal was to just lock into a pace," she said.

"It was a strong lap, that s all I can say," said the youngster from Bucharest.

"The plan was to go out fast, not this fast though, but I guess I can surprise myself."

"I was on for a decent time," said Dean. "It s not easy to see him ahead, you got to give it to him, 1:43:2, bloody hell, but that s been the case in this meet, the impossible seems impossible until it s done, and these youngsters seem to be doing just that."

Saturday s silver medallist, Lukas Martens completed a bad day by finishing seventh. In the morning the German failed to make it out of qualifying in the 800m free.

"The most fun is during the race because on the last lap I was saying to myself this is the biggest race of my life thus far and I want to make it memorable for me and everyone else," he said.

His time was the fourth fastest in the event s history and the second fastest, behind Michael Phelps, since streamlined suits were banned in 2009.

His swim was also faster than the best career time of another swimming legend, Australian Ian Thorpe.

"It s an honour and very flattering to be compared to Ian Thorpe," Popovici said.

"I just met him two days ago, he said if I win gold he would try to make it to award the gold medal to me, so I guess I ll see him soon. I guess Michael Phelps (is an inspiration) just like for other kids."

She had won three straight 1500m world titles before illness forced her to scratch from the 2019 final in Gwangju, South Korea. She rebounded to win gold in the Tokyo Olympics.

The American, who won her first major championship gold in the London Olympics on 2012, is an old-timer by distance swimming standards but at 25 years is 11 years younger than Chilean Kristel Koebrich who was eighth.

"I won t be doing this when I m 36," said Ledecky. "It s incredible to make the final at the worlds at that age, it gives all of us a little perspective."