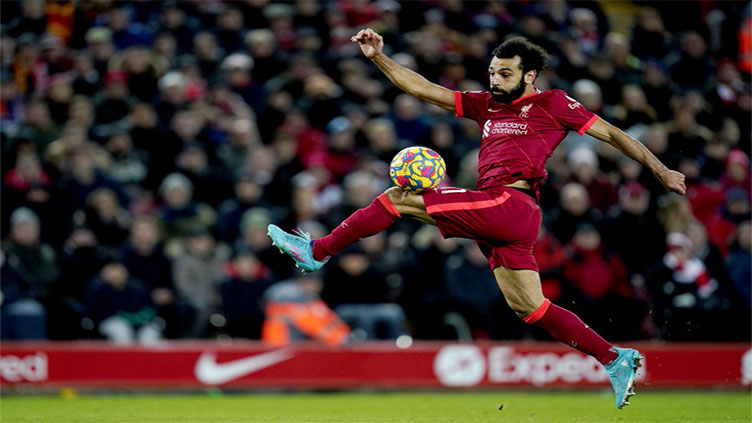 LONDON (AFP) - Liverpool crushed Leeds 6-0 to close the gap on Premier League leaders Manchester City to three points, while Tottenham boss Antonio Conte demanded talks over his future after their top four bid was rocked by a 1-0 defeat at Burnley on Wednesday.

Reds boss Jurgen Klopp believes his side must win every game for the rest of the season to pip City to the title.

That ambitious goal can t be ruled out on Liverpool s current form and Leeds were no match for the title chasers at Anfield.

Mohamed Salah netted twice from the penalty spot either side of a Joel Matip goal.

Sadio Mane bagged a brace in the second half and Virgil Van Dijk completed the rout.

Liverpool have won their last nine games in all competitions, with none more important than this success in their game in hand on City.

City were 12 points ahead of Liverpool just a few weeks ago, but that lead has quickly been whittled away by a combination of the Reds  blistering streak and a couple of blips from the champions.

The stage is set for a titanic battle with 12 games left for both teams as City aim for their fourth English crown in five seasons and Liverpool look to win their second in the last three.

"It is three points until the weekend and then City will probably win and then it will be six points. If we win all our games pretty much there will be a chance for us," Klopp said.

Despite the League Cup final against Chelsea looming on Sunday, the title is Klopp s priority and he recalled Trent Alexander-Arnold and Andy Robertson among five change from the win against Norwich.

Robertson was involved when Liverpool took the lead in the 15th minute.

Leeds defender Stuart Dallas was adjudged to have blocked the Scot s cross with his arm, conceding a penalty that Salah calmly converted for his 26th club goal this season.

In the 30th minute, Cameroon defender Matip advanced from the back and exchanged passes with Salah before dinking an expert finish past Illan Meslier for his first goal since December 2020.

Five minutes later, Luke Ayling conceded a penalty with a foul on Mane and Salah drilled high into the net for his second of the night.

Mane made no mistake from Jordan Henderson s pass in the 80th minute and the Senegal star scored again from close-range in stoppage-time.

Leeds have lost seven of their past 10 league games and are only three points above the relegation zone.

On a wet and windy night at Turf Moor, Tottenham reverted to the kind of erratic display that has frustrated their fans so often in recent seasons.

Just days after their epic 3-2 win at Manchester City, Conte s side were shattered in the 71st minute when Ben Mee met Josh Brownhill s free-kick with a far-post header past Hugo Lloris.

Tottenham remain in stuck in eighth place, seven points adrift of the top four as their hopes of qualifying for the Champions League begin to fade.

"I came here to try to improve the situation but maybe in this moment I m not so good," Conte said.

"We will see how the situation is and make an assessment. I m open to every decision because I want to help Tottenham.

"I m too honest to close my eyes and continue in this way, and also take my salary, it s not right in this moment."

It was a second successive victory for third bottom Burnley, who are now just two points from safety with a game in hand.

Crystal Palace enjoyed a 4-1 win over Watford at the expense of their former boss Roy Hodgson.

Hodgson recently returned to management after leaving Palace at the end of last season and is aiming to save Watford from relegation.