Atalanta hold Inter to give title hopefuls a boost 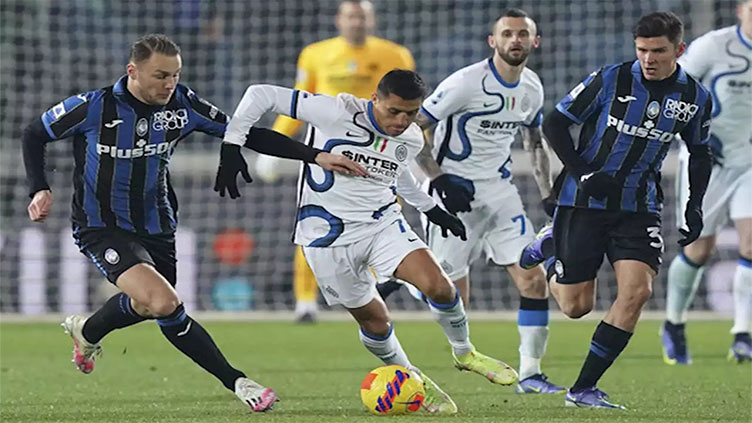 Atalanta hold Inter to give title hopefuls a boost

Atalanta gave Inter Milan's Serie A title rivals a boost on Sunday with a goalless draw.

A keenly-fought contest in Bergamo finished with a blank scoresheet despite each side creating a handful of golden scoring opportunities, with goalkeepers Juan Musso and Samir Handanovic excelling between their respective sticks.

Simone Inzaghi s Inter stay top but Milan, who are two points behind their local rivals in second, can take the summit with a win over Spezia at the San Siro on Monday evening.

"For how the match went a point is good... We had good chances but they could also have scored, so I think that it was the right result," Handanovic told DAZN.

Atalanta stay eight points back in fourth but can take huge credit from their display with a clutch of key players unavailable injured or with Covid-19 infections.

They are a point behind third-placed Napoli ahead of their match at Bologna on Monday hoping to gain some ground on Inter, who like Atalanta will have played a game fewer come the end of this round of fixtures.

"If anything we did a bit more than them; Inter sat very deep and waited for us to make a mistake," said Atalanta coach Gian Piero Gasperini.

"Overall I think we deserved something more from the game."

Edin Dzeko nodded wide the first clear chance of the night with a quarter of an hour gone, and 10 minutes later Musso kept the scores level with an outstanding save from Alexis Sanchez s close range effort.

It was Handanovic s turn to save his team four minutes after the break when he charged out to stop Matteo Pessina giving the hosts the lead from point-blank range.

From that scare Inter then tried to push on for the win, but Inzaghi -- who lost his voice during the match -- could hardly believe his eyes when Giuseppe Pezzella stopped Matteo Darmian from scoring with a full stretch clearance, and then Dzeko somehow headed over when Denzel Dumfries served him with a great opportunity to open the scoring.

Handanovic again kept the scores level with 10 minutes remaining when he got down superbly to save from Luis Muriel, who had turned on the turbo to burst away from Alessandro Bastoni and Milan Skriniar.

And once Mario Pasalic and Danilo D Ambrosio both wasted great chances to snatch the win for each side in the space of two minutes, an eventful match petered out into a draw.

Earlier Sergio Oliveira was decisive on his Roma debut after scoring the penalty which gave his new team an underwhelming 1-0 win over struggling Cagliari.

Oliveira, who was signed on loan from Porto on Wednesday, stroked home a 33rd minute spot-kick at the Stadio Olimpico in Rome after a handball by Dalbert was given following a VAR check.

However Cagliari would have snatched a point with five minutes remaining had Rui Patricio not tipped Joao Pedro s close-range effort onto the bar.

"We had complete control but the match could have finished four, 5-0 or 1-1," said Mourinho, who blasted his team s mentality after the Juve defeat last weekend.

Cagliari would have escaped the relegation zone had they made it three wins in a row, but are two points from safety after another new boy in Nani made an immediate impression by setting up David Okereke s leveller seconds after coming on in 17th-placed Venezia s 1-1 home draw with Empoli.

"I was a bit worried because I haven t had many training sessions with the team and right now I m not at my best physically but when you want to do something good you can," said Nani to DAZN.

Empoli sit 11th, one point behind Verona who won an entertaining early match at Sassuolo 4-2 thanks to Antonin Barak s hat-trick.