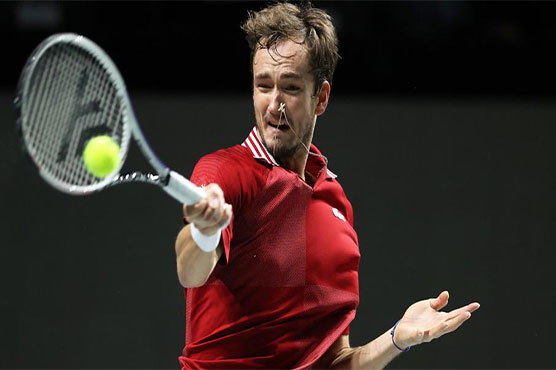 Russia will on Saturday face Germany for a place in Sunday s final with Novak Djokovic s Serbia meeting neighbours Croatia in the other semi-final on Friday.

"Madrid feels like home, we re winning a lot of matches," said Medvedev.

"It was a great boost of confidence to beat the home team (Spain, in the group stage). We are winning a lot of matches, we didn t lose a tie in the group.

"Saturday s going to be my first semi-final, so I m really looking forward to it."

"There s a lot of pressure when you know that you have to win and your opponent has nothing to lose," said Rublev.

"They go for it, they go for their shots and play without fear and in my case I know I have to win so you start to play less aggressive and you start to miss a bit more."

He added: "Today was a super tough match. I didn t manage to finish the match when I had a really great chance.

"I missed some easy balls and that brings him back to the game and since that moment he raised his level. He started to feel confident and he started to play much better and then it was 7-6 in the third."

Russia also made the semi-finals in 2019 when the last edition of the Davis Cup took place.

They defeated 2010 champions Serbia to make the last four -- where they lost to Canada -- with a tiebreak win in the third set of the deciding doubles.

Djokovic featured in that tie but Medvedev was absent.

Medvedev has won all three singles rubbers he has played in this year s competition and has yet to drop a set.

However, he looked weary on Thursday, hitting 20 unforced errors and nine double faults against his unheralded Swedish opponent.

Russia captain Shamil Tarpischev was in charge of his 100th Davis Cup tie having led the former Soviet Union team for the first time in 1974.