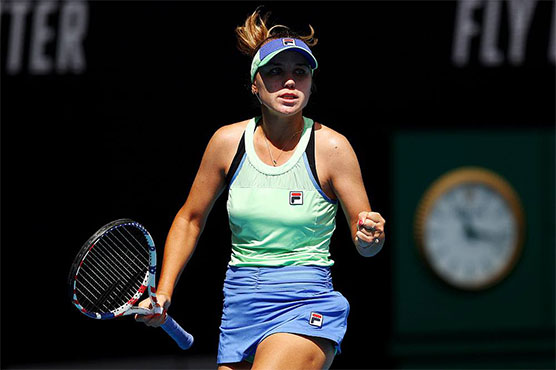 MELBOURNE (AFP) - An angry Sofia Kenin made a scratchy start Tuesday to her Australian Open title defence with an unconvincing victory over wildcard Maddison Inglis.

The fourth seed prevailed 7-5, 6-4 in one hour and 26 minutes, with the American vocal throughout and frustrated with her patchy performance.

"I m obviously not happy with the way I played," said Kenin, who made 27 unforced errors. "Being the first round, there were nerves for me but I m happy to get through."

The 22-year-old s return to the scene of her stunning breakthrough Grand Slam title, where she beat Garbine Muguruza in three sets, has been rocky after losing in the warm-up Yarra Valley Classic in the quarter-finals to the Spaniard.

She left the court then in tears and later declared she was troubled by a left groin injury, which she said might have been attributed to the mandatory 14-day hotel quarantine on arrival in Australia.

Moscow-born Kenin, playing with the roof open on Rod Laver Arena, appeared to move freely on Tuesday but struggled against the gritty Australian during a tight first set marked by long baseline rallies.

She eventually shrugged off the 23-year-old Inglis, who has not won a Grand Slam match in four attempts.

Kenin next plays Latvia s Anastasija Sevastova or in-form Kaia Kanepi of Estonia, who was runner-up in the warm-up Gippsland Trophy.

Earlier on Monday, a fit and firing Simona Halep started her bid for a first Australian Open title with an easy victory over local wildcard Lizette Cabrera on Monday, declaring she has adjusted to the "much faster" courts at Melbourne Park.

The number two seed required strapping and was hampered by a lower back injury in the warm-up Gippsland Trophy, but moved with ease in the 6-2, 6-1 romp in 59 minutes on Rod Laver Arena.

"It feels great to be back in Melbourne."

Halep, whose seven-year streak in the top 10 is the longest active run among women, broke serve in the opening game and then overwhelmed 23-year-old Cabrera, who has been unable to win a match at her home Slam in four attempts.

The 2018 French Open champion generally prefers slower, higher-bouncing surfaces, but insisted she was content with the quickness of the courts that had been a talking point among players in the tournament s build-up.

"It is much faster but I have gotten used to it because I ve been here for 10 days," she said.

"I feel good here on the court even if it s fast."

Halep, a two-time Grand Slam winner, will once again be out to dash Australian hopes when she meets Ajla Tomljanovic in the second round on Wednesday.

"She s a good player but I will just focus on myself. It will be a tough battle," she said of the clash with the world number 69.

Halep, 29, is seeking a maiden triumph at Melbourne Park having fallen short to Caroline Wozniacki in the 2018 decider.

She was left stunned last year after a straight-sets loss to Garbine Muguruza in the semi-finals.