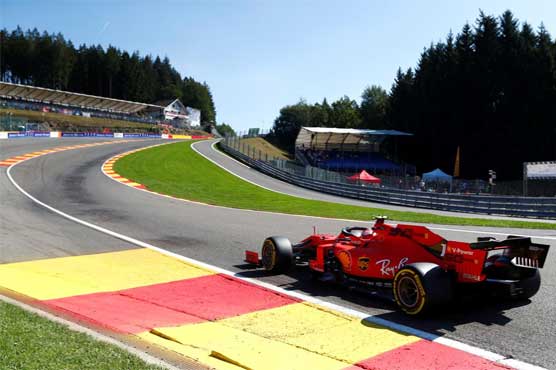 SPA-FRANCORCHAMPS (Reuters) - Ferrari enjoyed a dominant start to their Belgian Grand Prix weekend with Charles Leclerc leading Sebastian Vettel in a one-two for the Maranello-based Formula One team on the opening day of practice.

Leclerc ended the day with a time of one minute, 44.123 seconds as Formula One roared back to life after its summer shut down.

That put him 0.630 seconds clear of his German team mate who had topped Friday’s opening 90 minute session.

Valtteri Bottas, confirmed alongside Lewis Hamilton at Mercedes for the 2020 season on Thursday, was the Ferrari pair’s closest challenger in third.

Hamilton, who leads the overall standings by 62 points, was hot on his heels in fourth.

“After the holidays, a Friday like this is good,” said Leclerc.

“Qualifying pace was strong, race pace a little bit less, so we need to work on the race pace, especially, for Sunday, but we look okay with the balance in between the two.”

Ferrari, still hunting for their first win of the year, have struggled around twisty tracks this season.

But their car has been better suited to high-speed layouts like Spa, which will host Sunday’s race.

That track and Monza, where Ferrari’s home Italian Grand Prix will be held the following week, have been singled out as the two best opportunities for the team to shine.

Vettel is hoping to win his first race since triumphing in Belgium last year.

Mercedes have won 10 of the 12 races so far this year.

While Bottas and Hamilton ended the day in better positions than the fifth and sixth they had secured in the morning, they were still nearly a second off Leclerc’s benchmark.

“They’re really killing us on the straight lines,” said Bottas.

“We’re trying to find every bit of performance we can for tomorrow.

“We need to make big steps if we want to battle with them.”

Hamilton in particular had a less than straightforward day, with throttle and telemetry problems affecting his running in the opening session.

He pitted to change helmets in the afternoon after complaining of dirt and dust coming through his visor.

“It was a little bit of a mess,” said the Briton.

“I had a feeling this weekend would really work for them (Ferrari).

“So we just have to somehow apply the pressure another way if we don’t have it on pure pace.”

Behind the top four, Sergio Perez, confirmed for three more years at Racing Point, was a strong fifth.

The Mexican was forced to pull over, however, with smoke and flames spewing out of the back of his car in the session’s dying minutes.

The incident brought out the red-flag and an early end to the session.

The Dutchman, cheered on by his orange-clad fans, had been third in the opening session but the 21-year-old, winner of two of the last four races, complained of problems with his Honda power unit.

Thai rookie Alexander Albon, fourth in the morning, rounded out the top 10 in an impressive debut for Red Bull.

Pierre Gasly, demoted from Red Bull to Toro Rosso in a swap with Albon, endured a difficult day. He finished 17th.