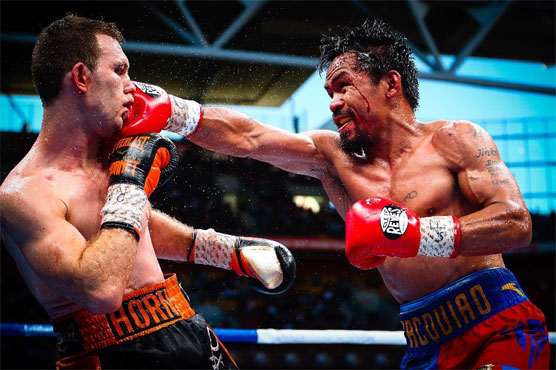 Pacquiao s camp and observers including Lennox Lewis slammed the decision, as the eight-weight world champion said on Filipino TV: "We thought that we won this fight."

"There is no problem with me if there s a rematch," he added. "It would be better if the rematch would be held in the Philippines."

Pacquiao, 38, is considered one of the greatest fighters of his generation. His camp had predicted a "short and sweet" win over Horn, a 2012 Australian Olympian.

But Horn showed no signs of being overawed by the occasion, relentlessly taking the fight to the Filipino great and not allowing him to find any rhythm.

"I feel like he couldn t get a hold of my gap. I was feinting a lot, trying to upset his rhythm and I think that was working throughout the majority of that fight," said Horn, who stands three-and-a-half inches (nine cm) taller than Pacquiao.

Pacquiao did manage to land some left jabs in the opening rounds to take the early points, but Horn refused to back away and his brawling tactics paid dividends through the middle stages.

"He was quick when he put combinations together but I felt controlling the gap made it easier to see the punches coming," Horn said.

"The size difference helped too."

Pacquiao, bleeding profusely from cuts high above both eyes caused by accidental head clashes, launched a savage counter-attack in the ninth round and appeared to have Horn in trouble with some massive blows that left the Australian staggering.

"The ref came over (at the end of the round) and said  show me something or I ll stop the fight ," Horn said.

Horn recovered and came out strongly in the 10th. "That was just my heart that kept me going," he said.

"He got me with a couple of good shots and I did go backwards more in that round than in any other round in the fight, but I still felt good.

Both fighters began to tire in the final stages of a contest fought at a breakneck pace, but Horn s early lead proved too much to peg back as he claimed the biggest win of his career.

Pacquiao had been hoping to set up a second big-money showdown with Floyd Mayweather, but it was Horn who called for a fight with the unbeaten American immediately after his win.

Pacquiao s strength and conditioning coach Justin Fortune was left fuming by the result, claiming: "The referee was sketchy, the judges were crazy."

"Manny lost the fight, but Jeff Horn looks like a pumpkin," added Fortune, referring to the badly swollen face of Horn, who needed stitches over his right eye.

Lewis, the former undisputed world heavyweight champion, tweeted: "This is what s wrong with boxing. Horn was very game but I m hard pressed to see how he could have won that fight by any stretch!"