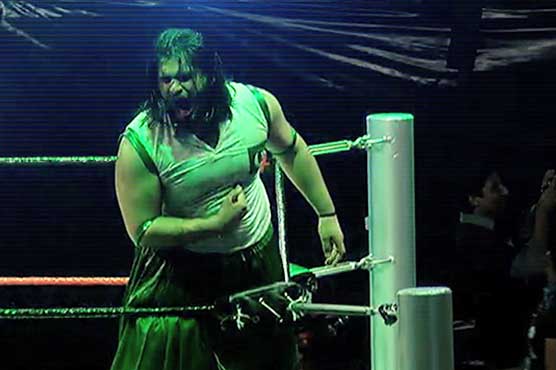 The spectators thoroughly enjoyed the performance of international stars at KMC Sports Complex.

KARACHI (Dunya News) – The first round of pro-wrestling competition in Pakistan began from Karachi where Badshah Pehalwan Khan secured victory over Carlito on the inaugural day.

The spectators thoroughly enjoyed the performance of international stars at Karachi’s KMC Sports Complex. The wrestlers entered the ring in their conventional styles, and entertained the crowd with their athletic moves. The audience also witnessed plenty of punches and flying kicks.

The first fight of the day was fought between Algeria’s Yaseen Usmani and Italy’s Fabio Ferrari in which the former brushed aside the latter.

The second fight of the day was so intense that the rope of the ring broke during the match but Adam Flex Maxted and Aaron Rammy continued to wrestle. Eventually, Adam Flex defeated Aaron Rammy.

Third match was between the female wrestlers including Audrey Bride, Angel’s Bombita and Betty Trash. Power cut was also experienced before this match, but the electricity was restored soon to commence the proceedings. Angel’s Bombita beat both her opponents and was declared victorious.

The last fight of the day was held between Pakistan’s Badshah Pehalwan Khan and Carlito in which Badshah Khan emerged victorious. Both wrestlers were so passionate that they even entered the crowd while fighting.

After the successful event in Karachi, the competition will move to Lahore on May 19, and to Islamabad on May 21.