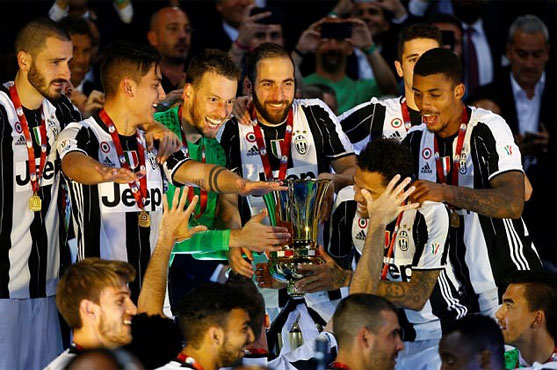 Juventus secured a record third successive Italian Cup with a 2-0 victory over Lazio.

ROME (AFP) - Dani Alves and Leonardo Bonucci struck one apiece as treble-chasing Juventus secured a record third successive Italian Cup with a 2-0 victory over Lazio at the Stadio Olimpico on Wednesday.

Juventus, who won a league and Cup double the past two seasons, can clinch a record sixth consecutive Serie A title -- and a record third double -- with victory at home to Crotone on Sunday.

Massimiliano Allegri s men also face Real Madrid in the Champions League final in Cardiff on June -- and on this showing the Spanish giants will have cause for concern.

Days after seeing their title celebrations put on hold at the Stadio Olimpico following a 3-1 defeat to Lazio s city rivals Roma, Juventus were back their formidable best.

And Allegri said he expects more of the same on Sunday.

"This win has given us a boost for Sunday. We absolutely have to wrap up the championship," said Allegri.

"The lads delivered a great technical and defensive performance that has more than made up for last week against Roma."

Bonucci said: "Sunday is another final for us. We have to secure our second objective of the season, then we ll all start looking to Cardiff."

Lazio, whose last trophy came from their 2013 Cup triumph, had hoped to emulate Roma by sending Juventus back to Turin with their tails between their legs.

But despite a battling display by Simone Inzaghi s men, Lazio spurned their few chances, and were outplayed by the slick, passing play inspired by Argentinian playmaker Paulo Dybala.

Inzaghi refused to fault his players, saying: "There s some bitterness, but we came up against a top Juve side.

"I m sorry we haven t given joy to the fans and the players, but we have to look positively at our season.

"We ve qualified for the Europa League with three games to spare and, apart from that, reaching the final is the best thing we ve done this season."

The sizeable Lazio support were given hope in the opening minutes when Keita Balde saw his shot from a tight angle, which evaded  keeper Norberto Neto, come off the post.

The scare was enough to jolt Juve into life.

Argentina striker Gonzalo Higuain, who went on to spurn several chances to add to Juve s tally, controlled well outside the area and unleashed a volley that Thomas Strakosha did well to block.

Strakosha pulled off an acrobatic save out the bag to stop Paulo Dybala s long-range effort, the first of many in a performance that underlined the 22-year-old Albanian s talents.

On the quarter-hour, Lazio piled on the pressure, but when Balde s cross into the area went awry it sent Juventus on a quick counter that left the capital side exposed.

Strakosha palmed Dybala s ferocious strike to safety, and when it fell to Higuain three yards out he kept the Argentina striker s effort out with his legs.

When Lazio were caught deep in Juve territory soon after, it exacted a heavier toll.

Dybala struck the corner, Alex Sandro flicked on towards the near post and Bonucci had an easy job tapping past Strakosha from close range.

Minutes before the interval, play was waved on when Thomas Rincon was left injured in midfield, and it almost paid off for Lazio when Ciro Immobile sent a header inches past Neto s upright.

Juve resumed in similar fashion, a combination of vertical passes between Dybala and Higuain sending Mario Mandzukic through until the big Croatian came down under a challenge from Wallace.

Anderson was involved again when Lazio edged even closer, collecting Dusan Basta s smart ball to cross for Immobile at the back post.

The striker rode on Chiellini s back to get his head to the ball, which came off the defender and was somehow kept out by an alert Neto.

Juve should have had more, but Dutch defender Stefan De Vrij did well to stop Dybala and Higuain spurned two great chances late on to get his name on the scoresheet.