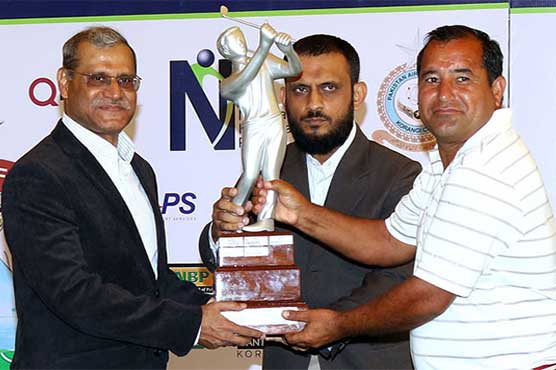 Munir won the Championship with a gross score of (3) Under-par 285.

Muhammad Munir won the Championship with a gross score of (3) Under-par 285. He started first round with 70 gross and led the Professional Category followed by 71, 70, 74 on day 2, 3 and 4 respectively.

The fourth and the final day round was a nail biting competition between Mohammad Shabbir, Ansar Mehmood and Matloob Ahmed. Matloob Ahmed played a magnificent round of (2) under-par 70 on final day to rise from fourth to second position. Matloob’s gross score was (1) Under-par 287.

‘Airmen Golf Course is one of the most challenging golf courses in Pakistan that presents tough playing conditions with narrow fairways and numerous bunkers spread all over the course’, says a PAF statement.

Air Chief Marshal Sohail Aman, congratulated winners of all the categories in the championship and also appreciated the management committee, officials and personnel of Airmen Golf Course for making this event a success.

The Championship featured 350 golfers, including 76 professionals from all over the country for the prize money of Rs 4 million.

Chief of the Air Staff Open Golf Championship was introduced in 1977 and ever since it has been an annual feature in PGF and PAF annual sports calendars.