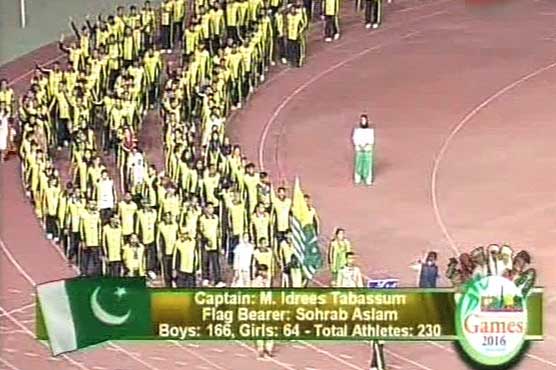 more than 2000 athletes will be participating in the inter-provincial games.

ISLAMABAD (Dunya News) – An opening ceremony of the first inter-provincial games began in Islamabad on Saturday. Pakistan’s former hockey team Captain and Olympian Shehbaz Ahmed Senior was given the honour of lighting the torch while President Mamnoon Hussain officially announced the beginning of the games.

Guests present at the opening ceremony greatly enjoyed the performances of renowned singers, especially Hadiqa Kiani. Teams participating in the event also displayed a march past parade. A dance performance depicting the cultural diversity of the country was also presented during the ceremony.

The inter-provincial games will continue up until the 26th of April while more than 2000 athletes will be participating in the event.

PTI gears up for Foundation Day ceremony in Islamabad today

Pakistan all set to ditch IMF in October

Pervaiz to Imran: 'don't oppose the commission, cooperate instead'