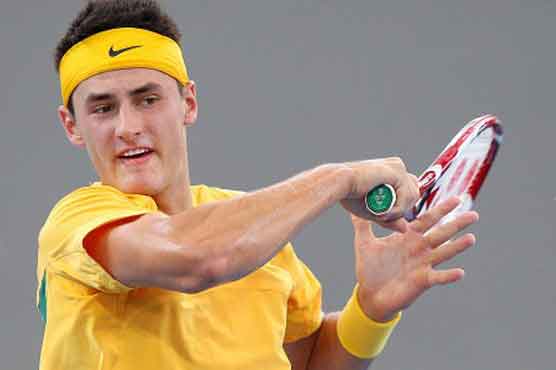 Tomic was dropped for February's win over Taiwan after Rafter vowed to "teach him a lesson".

TASHKENT (AFP) - Troubled star Bernard Tomic is expected to seize his Davis Cup chance this weekend after being recalled for Australia's tie with Uzbekistan following an uneasy reconciliation with captain Pat Rafter.

Tomic, whose Grand Slam feats have been tempered with run-ins with the law and altercations with senior tennis personalities, was dropped for February's win over Taiwan after Rafter vowed to "teach him a lesson".

The world number 43 initially said he wouldn't be available until the World Group play-offs in September, before changing tack and agreeing to travel to Namangan for the Asia/Oceania Group I second-round tie.

Rafter admitted Tomic, Australia's top-ranked player ahead of veteran former world number one Lleyton Hewitt, Marinko Matosevic and Matthew Ebden, has "still got a little way to go" in terms of his attitude and commitment.

"He's getting there though and he's heading in the right direction and that's all I can ask from him right now," Rafter said, according to Australia's Herald Sun.

"But until we get under that pressure situation... we'll wait and see how everyone goes under these tough circumstances."

Tomic is likely to face Denis Istomin on Friday, with the winner of the tie advancing to September's play-offs for a spot in next year's World Group, the highest tier of the global team competition.

Istomin, ranked 46, is Uzbekistan's only top-200 player with Farrukh Dustov, Sarvar Ikramov and Temur Ismailov not expected to hinder Australia's progress on the indoor clay of Namangan, a city in Uzbekistan's east.

Meanwhile Go Soeda leads Japan into their second-round tie against South Korea in Tokyo, with the hosts also hotly favoured to progress smoothly to the World Group play-offs.

In Group I's first-round play-offs, where the losers of February's opening ties are fighting to avoid a relegation fixture in September, India will also try to put internal strife behind them as they face Indonesia.

India crashed 4-1 to South Korea in February after losing their best players in a row over pay and conditions, but they will be back to full strength in Bangalore as they seek to extend their 5-0 Davis Cup record against Indonesia.

Somdev Devvarman, the world number 208, and veteran doubles specialist Leander Paes are the leading lights of a team expected to sweep aside an Indonesian outfit featuring three players ranked outside the top 800.

"We do have a very good record against them but we can't afford to take lightly what is a must-win tie for us," said coach Zeeshan Ali, whose appointment in January was one of the reasons for the row with leading players.

"It was a missed opportunity (against South Korea) because we could have won had all the players been available and then we would have played Japan at home for a place in the World Group play-offs," he added.

"But I am glad all the players are back and they are determined to do do well."

Doubles specialists Mahesh Bhupathi and Rohan Bopanna were not picked. Last year, they were barred from the Davis Cup until 2014 for refusing to partner Paes at the London Olympics, although a court later suspended the ban.

In the other first-round play-off, China face cross-straits rivals Taiwan in Tianjin with the hosts, spearheaded by Ze Zhang and Wu Di, expected to have the edge.