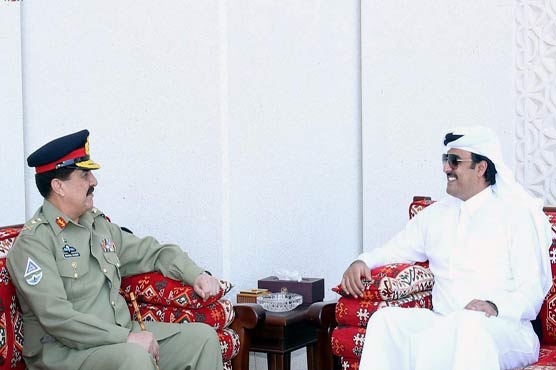 Chief's visit is bound to provide a fillip to the efforts

General Raheel Sharif Chief of Army Staff has met the Qatari Amir Sheikh Tamim Bin Hamad Al Thani, his Prime Minister and the Defence Minister.
The Chief’s visit is bound to provide a fillip to the efforts to convince the Taliban leaders, Mullah Muhammad Rasool Akhund, Mullah Mansoor, Gulbuddin Hikmatyar to join the quadrilateral talks and discuss peace for the Afghanistan.

Political analysts are hopeful that the Army chief’s visit would produce a positive impact and help create a favourable ground for the Taliban to join the talks in the next round to be held in the first week of March.

Qatar has been hosting the Taliban representatives for the last several years and according to the Inter Services Public Relations (ISPR), the meetings in Qatar focused on facilitation of the reconciliation process in Afghanistan through the Qatar office.

Pakistan has been trying hard to bring the intransigent Taliban back on the negotiation table. Despite the fact that they have presented a list of demand which no one has indicated will be met.
The UN has so far not removed the travel ban on the Taliban nor unfrozen their assets. Their demand for the removal of all foreign troops too is not going to be fulfilled in the near future.

Due to the army chief’s visits to Afghanistan the government of president Ghani has toned down its criticism of the Taliban and have agreed to negotiate with the Taliban referring to them as political opponents instead of terrorists.

Taliban successes in Helmand and other parts of Afghanistan have also convinced the Afghan government that peace cannot be achieved without the cooperation of the Taliban factions. Pakistan has maintained good contacts with the Taliban but has lost some of the influence it used to enjoy in the past to convince them to follow Islamabad’s dictates.

Gulbuddin Hekmatyar the leader of Hezb-e-Islami has reacted positively to the offer of dialogue stating that the intra-Afghan dialogue was the only solution to the problem and only Afghans could determine their future.

Mullah Akhtar’s representative Sher Mohammad Abbas Stanekzai who is leading the political office in Qatar is said to have surreptitiously visited Islamabad this month and held informal talks with the quadrilateral group to lay the groundwork for the inclusion of the Taliban representatives and resumption of talks.

Political analysts are of the view that the Taliban will strengthen their negotiating positions by launching more military offensives in spring before joining the negotiations.

Each country has maintained contacts with the top hierarchy of the Taliban, knowing well that these contacts could help reap geostrategic benefits in the future. END

Murderers of innocent children will be brought to justice: Army Chief