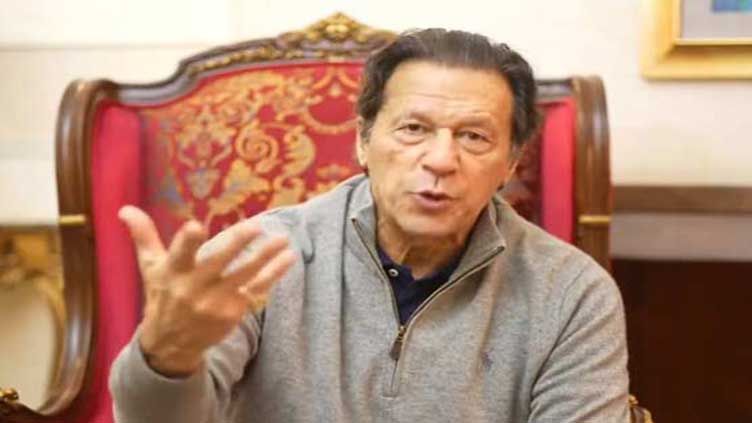 LAHORE (Dunya News) - Pakistan Tehreek-e-Insaf (PTI) Chairman Imran Khan has asked his workers on Friday to ready themselves for the general elections.

Taking a jibe at the coalition government, the former premier said that the thieves had been imposed on the country, adding themselves obtained the license of plundering.

PTI chairman Imran Khan said on Thursday that he was the prime minister and never called former army chief retired General Qamar Javed Bajwa his boss and the new army chief should not follow the policies of his predecessor.

Speaking to the YouTubers at Zaman Park on Thursday, he said that he had never thought about appointing General Faiz Hameed as the Army Chief but propaganda was hatched against him. The former prime minister said that Punjab Chief Minister Parvaiz Elahi has fully entrusted him and will do as he want.

The PTI chairman went on to say that National Accountability Bureau (NAB) was under the establishment and it only kept its hands on the weak, adding that the society is not stabilized until there is justice.

He said the PTI chairman had summoned a meeting of party’s senior leadership in which the PTI leadership has given Imran Khan the right to dissolve assemblies. The PTI vice chairman said Imran Khan took everyone into confidence about his decision during the meeting, adding that the only solution to the country’s problems was holding snap polls.

The former foreign minister went on to say that it s the decision of the government if they wanted to give priority to its own interests over the country by not holding snap elections that could further sick country. "We want that the process of elections gets completed in Punjab and KP before Ramzan", he added.

Qureshi said that Imran Khan s desire is not to delay the dissolution of assemblies and everyone has supported his position, adding that the incumbent government has no plan as it has lost the confidence of the business class. “There is no investment, the economy is on downward trend, adding that the stance of Miftah Ismail and Ishaq Dar is before everyone.”