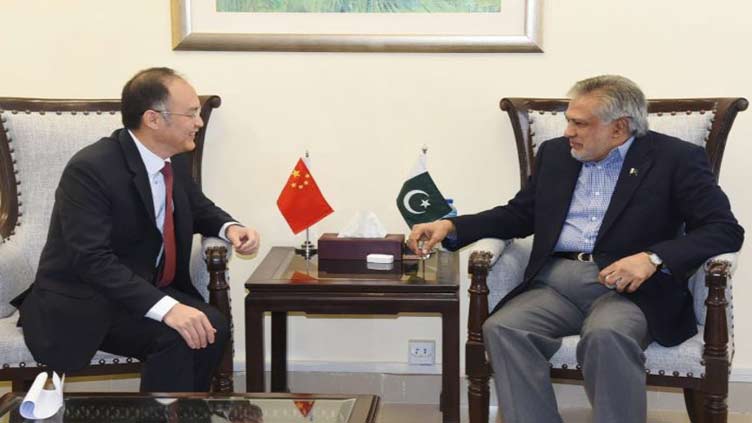 ISLAMABAD (Dunya News) – The Finance Minister and Ambassador of the People’s Republic of China, Nong Rong here on Friday discussed enhancing bilateral relations in economic and financial sectors between both the friendly countries.

According to press statement issued by finance ministry, the discussion was made during the call on meeting of Chinese Ambassador with the minister. Special Assistant to Prime Minister on Finance, Tariq Bajwa, Secretary Finance and other senior officers of Finance Division also attended the meeting.

On the occasion, Dar shared the deep-rooted and brotherly relations between Pakistan and China and highlighted that both countries have historic and strong bilateral ties in various economic sectors.

He also highlighted the repercussions of unprecedented floods faced by Pakistan which have largely impacted the infrastructure, agriculture, lives and properties of the people.

The minister appreciated support given by the government of China during these testing times and shared that present government was taking various measures to ease the life of masses by ensuring fiscal and monetary stability.

The Ambassador assured his government’s sustained support to Pakistan in hour of need and shared that China stands with people of Pakistan in these hard times. He also thanked Government of Pakistan for giving facilitation to Chinese projects in Pakistan.