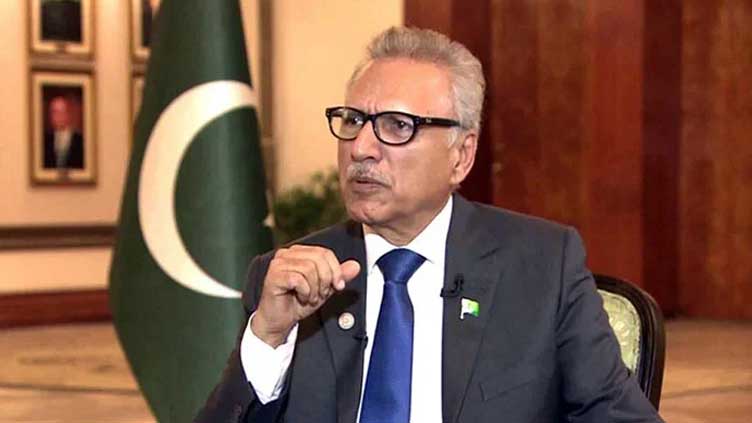 ISLAMABAD (Dunya News) - President Dr Arif Alvi on Thursday said that Pakistan had many strengths and opportunities which should be communicated to the coming generations to provide them with a baseline and motivation to make their country stronger and prosperous.

The session was chaired by the Director of the London School of Economics and Political Science (LSE), Baroness Minouche Shafik.

The president said that he had been playing his role within the confines of the Constitution.

He said that despite the fact that Pakistan had been facing difficulties and challenges, it had many strengths which helped it to successfully overcome many crises.

He said that during the COVID crisis, Pakistan used a unique and customized, home-grown strategy to counter the COVID-19 pandemic.

“The leadership, the relevant institutions and health machinery worked in uniformity, adopting the partial lockdown strategy and supplementing it with aggressive communication, awareness and education tools. It helped the country to save the lives and the livelihood of the people, kept our mosques, businesses and industrial sites open, and we came out of this crisis much better than our neighbours and many other countries of the world,” he added.

The president said that Pakistan advocated for peace throughout the world on the basis of equality, dignity and sovereignty and wanted resolutions of outstanding international and regional conflicts through negotiation, discussion and deliberations.

He stressed that the international community and the United Nation should play their role to resolve the long outstanding issue of Indian Illegally Occupied Jammu and Kashmir in the spirit of the UN Security Council’s Resolutions and take stock of rising religious extremism in India, its Hindutva ideology, Islamophobia and persecution of minorities, especially Muslims.

While touching upon another strength, the president said that Pakistan took up the challenge of countering global warming and climate change despite meagre resources and embarked on an ambitious program to plant a billion trees, and later building on its success, the government launched 10 billion tree plantation drive to reduce the emission of greenhouse gases, mitigate the impacts of climate change and save flora and fauna and nature for future generations as our share for a better world tomorrow”, he added.

He said that Pakistan generously and willingly opened its arm to the refugees displaced due to a crisis of international nature and was hosting millions of Afghan refugees for over 40 years, which was unprecedented in global history.

President Alvi said that all refugees should be treated as equals and should be given the same treatment irrespective of their race, colour or religion.

He said that the Presidency took an active part in addressing the social and health issues faced by the nation and promoting preventive modes of treatment by focusing on self-examination and early diagnosis to avoid expensive, intrusive and scarce curative treatments.

The president said that Pakistan faced a prevalence of breast cancer much more than the world average due to social and cultural taboos attached to it and a lack of education and awareness.

He further said that this situation was now changing with the launch of continuous and persistent awareness, education and pursuance campaigns over the last four years spearheaded by the First Lady with an emphasis on self-examination and early diagnosis by using all forms of communication, including social and conventional media and cell phones.

President Alvi said that more and more women were now seeking medical help at the early stages of breast cancer which had an over 90% recovery rate.

Talking about the issue of mental health, the president said that the topic was still considered taboo in Pakistan, despite the fact that 24% of Pakistanis were under some kind of mental stress.

He stated that Pakistan had fewer than 2000 mental health professionals for a population of about 220 million which was highly insufficient and stressed the need to use technology and web-based IT tools to substantially increase the reach of mental health aid to a large population.

The president said that the Presidency had spearheaded the program for the skill development of youth, particularly in the field of IT, as he believed that it was the fastest route for Pakistan’s development.

He said that the youth bulge in Pakistan was a great asset which could be converted into an economic force by imparting quality education and skills in information technology, computing, artificial intelligence, virtual reality and blockchain technologies and other such sophisticated and critical disciplines which he said would meet the ever-growing needs of the country and other countries of the world.

He said that 2.4 million people had benefitted from the prime minister’s online digital skills program which shows the interest of the youth in these disciplines.

President Alvi said that he had been actively engaging all stakeholders both in the public and private sectors to bring more than 50% of the women population into the active economic stream by encouraging the stakeholders to create enabling environment for them to realize their full potential.

He said that he has been addressing the issue of fake news which was exacerbated due to the permeation of social media at the grassroots level.

He called for training and educating the masses to only entertain news which were originated from an authentic source and was credible and reliable before disseminating it any further.

He said that education, training and awareness regarding sifting authentic news from fake news was perhaps the best solution to counter fake news.

While touching upon the political and economic situation of the country the president said that he believed that political stability was closely linked with economic stability. Therefore in his personal capacity he had been trying to bring the relevant stakeholders to one table for developing a consensus to address the major issues faced by the nation.