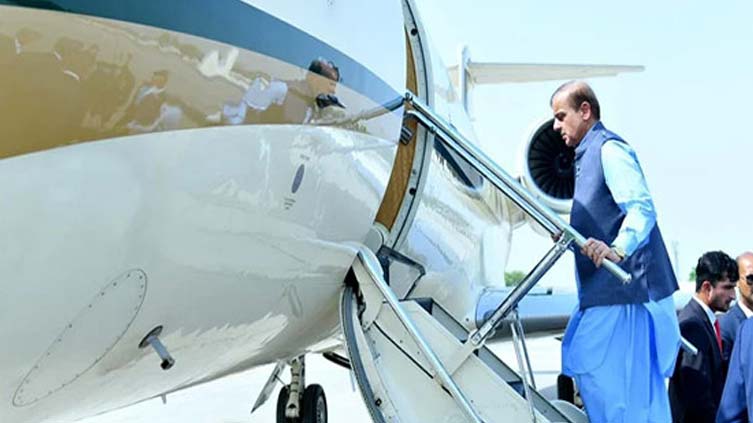 PM Shehbaz to leave for 3-day visit to Turkiye on Thursday.

ISLAMABAD (Dunya News) - Prime Minister Shehbaz Sharif will be leaving for a three-day visit to Turkiye. Schedule of his visit has also been issued.

According to sources, the official tour of the PM will start on Thursday, November 24.

The Prime Minister will also participate in the landing ceremony of the ship ready with Pak-Turk cooperation.

According to diplomatic sources, the Prime Minister will inaugurate the frigate built with the cooperation of Pakistan-Turkish Navy during his visit to Turkey, the frigate will be inaugurated jointly by the PM Shehbaz and the Turkish President Recep Tayyip Erdogan.

Shehbaz’s first visit to Istanbul as prime minister came on May 31, where he met Turkish President Tayyip Erdogan, followed by delegation-level talks.

He was warmly received by Turkish Defence Minister Hulusi Akar and senior government and diplomatic personnel at the Ankara Esenboga Airport.

A smartly turned-out contingent of the Turkish Army presented a salute to the prime minister, who was on his maiden visit to Turkiye.

Meanwhile, PM Shehbaz’s recent tour was of Egypt where he attended the Climate Change Summit. Later on, the PM went to London for a private visit. During his stay in London, the premier held several rounds of talks with Pakistan Muslim League-Nawaz (PML-N) supremo Nawaz Sharif during which key political issues came under discussion.

This was PM Shehbaz’s third trip to London since he assumed the country’s top office in April and came ahead of the appointment of the new army chief.

After coming to Pakistan, he contracted Covid-19 and after recovering, he will be resuming his official work.