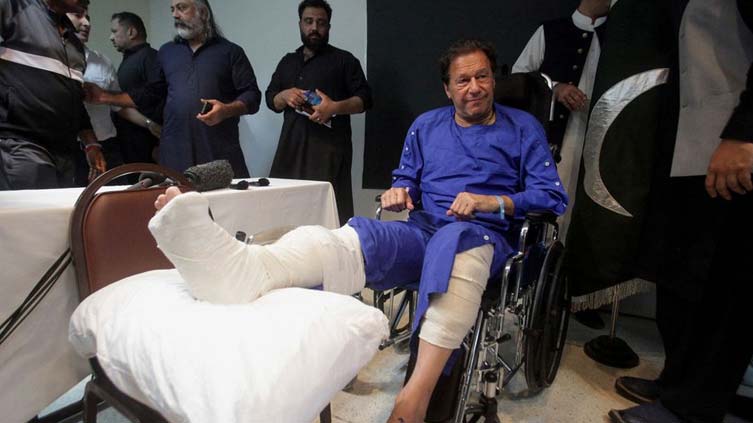 LAHORE ( Dunya News) - Pakistan Tehreek-i-Insaf on Monday filed petitions in different registries of the Supreme Court (SC) including Lahore, Karachi, Peshawar, and Quetta seeking registration of an FIR of the Wazirabad gun attack as demanded by party Chairman Imran Khan challenging the decision of the Punjab police of not nominating the persons cited by the PTI Chairman in its FIR.

The PTI petitions are also seeking the apex court’s involvement in the matters of Senator Azam Swati’s leaked video and murder of journalist Arshad Sharif in Kenya.

In Lahore registry of the Supreme Court, the petition was filed by Shah Mehmood Qureshi, Usman Buzdar and other parliamentarians.

The petition stated that the PTI has requested to form a judicial commission. It implored the court to take action on these matters by taking suo motu notice.

In its petitions, the PTI demanded investigations into the gun attack on Imran Khan, Swati’s leaked video and Arshad Sharif’s murder.

The PTI wants to lodge an FIR of the Wazirabad gun attack against three government officials.

The former premier is accusing the prime minister, interior minister and an intelligence agency officer of hatching a plot to kill him. But the Punjab police refused to nominate the intelligence officer in the FIR and they did not register the complaint of the case even after the lapse of four days of the incidence.

However, the Supreme Court on Nov 7 directed the Punjab IG Police Faisal Shahkar to either register an FIR of the case within 24 hours or face suo motu notice.

In compliance with the court order, the police on the same day registered the FIR of the Wazirabad gun attack on the complaint of its sub-inspector. But the police FIR did not nominate the three top officials cited by the PTI chief.

Now, the PTI has moved to the apex court to register its own FIR nominating three government functionaries.

The PTI today (Monday) submitted its applications for the registration of FIR to all registries of the apex court.

On Nov 3, Imran Khan was shot in leg in an assassination attempt in Wazirabad during his long march. One of his supporters was killed while his party members who accompanied him on a container sustained injuries.