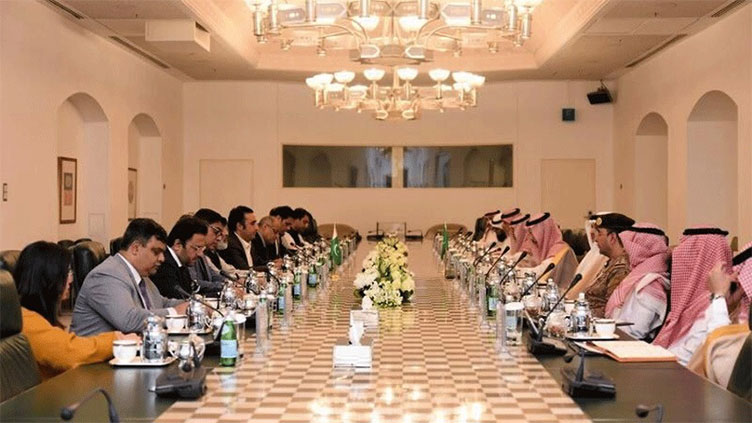 RIYADH (Dunya News) - Foreign Minister Bilawal Bhutto Zardari and Prince Faisal bin Farhan Al Saud, the Foreign Minister of the Kingdom of Saudi Arabia, jointly chaired the inaugural session of the Ministerial Committee of the Political and Security Pillar of the Saudi-Pakistan Supreme Coordination Committee, held in the Ministry of Foreign Affairs, Riyadh on Thursday.

During the meeting, both sides held wide-ranging discussions on host of issues related to political and security domains.

Underscoring the longstanding fraternal and strategic ties between the two countries, Foreign Minister Bilawal expressed his resolve to further strengthen cooperation across entire spectrum of bilateral relations to realize the aspirations of the leaderships of the two countries, achieve common objectives and push their relationship to reach greater horizons.

The two sides shared assessment of the changing regional and global environments and reaffirmed their commitment to continue coordinating positions on all issues of common concern including, among others, Indian Illegally Occupied Jammu and Kashmir (IIOJ&K), Afghanistan Yemen and Syria.

Foreign Minister Bilawal Bhutto Zardari reiterated Pakistan’s firm support for safety and security of the Kingdom of Saudi Arabia. He stressed the importance of continued coordination between the two countries on combating activities of terrorist groups that aim to undermine the security and stability of the regional countries. The Foreign Minister also highlighted the need to further strengthen institutionalized linkages between the two countries to counter threats in the security domain; including cyber security, counter terrorism and its financing, organized crimes, drug trafficking and money laundering.

The Foreign Minister expressed satisfaction on existing military and defence ties between the two brotherly countries and underscored Pakistan’s commitment to further bolster cooperation in this area.

The meeting was held under the framework of Saudi-Pakistan Supreme Coordination Council which is chaired by the Prime Ministers of both countries. Senior officials from the Ministries of Foreign, Defence, Interior and the Security and Intelligence Services of both countries also attended the meeting.