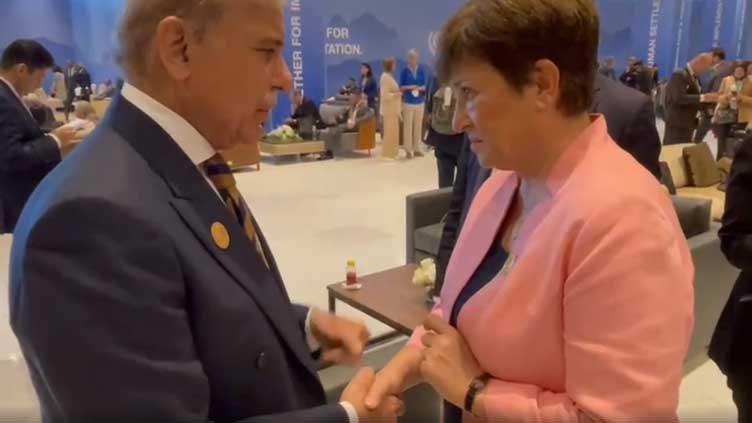 The Premier was talking to Managing Director of the International Monetary Fund (IMF) Kristalina Georgieva in Egypt on Monday on the sidelines of the COP 27 summit.

He said we have changed our budget estimates for immediate support and rehabilitation of flood victims.

Acknowledging the cooperation of IMF, the Prime Minister expressed the commitment to complete the latest IMF programme.

He hoped that the COP27 summit will be a milestone in achieving climate justice.

Pakistan and European Union have agreed to make joint efforts for combating the effects of climate change.

The understanding was reached during meeting of Prime Minister Shehbaz Sharif with President of European Union Commission Ursula von der Leyen on the sidelines of COP 27 summit in Egypt.

Underscoring the need for international cooperation to address challenges of climate change, the Prime Minister said the whole world will have to suffer the effects of climate change in future which developing countries are facing today.

He appreciated the cooperation of European countries in removing Pakistan from FATF’s grey list and their spirit of helping the flood affected people in Pakistan.

He said there exists huge trade potential between Pakistan and European Union which needs to be taken to the optimum level.

Prime Minister Shehbaz Sharif held a meeting with Secretary General of Arab League Ahmed Aboul Gheit on the sidelines of Climate Implementation Summit in Sharm Al Sheikh.
They discussed issues of bilateral and mutual interest and agreed on strong cooperation to prevent the devastating effects of climate change.

The Prime Minister appreciated the Arab League Charter and Secretary General’s determination to achieve it.