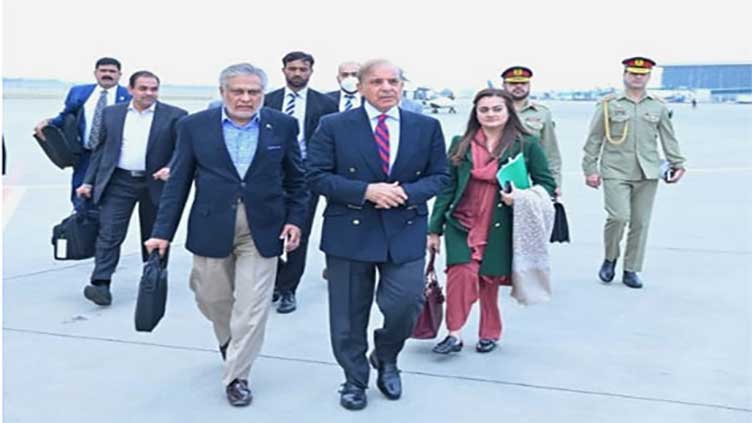 ISLAMABAD (Dunya News) - Prime Minister Shehbaz Sharif has returned to the capital after completing the visit to China on Thursday.

Pakistan and China have reaffirmed commitment to further strengthen and deepen bilateral All-weather Strategic Cooperative Partnership and enhance practical cooperation in all areas.

The resolve came during the joint statement issued at the conclusion of the Prime Minister Shehbaz Sharif’s two-day visit to China.

The statement said that Prime Minister Shehbaz Sharif held in-depth discussion with the Chinese leadership, including President and the Prime Minister, on the bilateral relations as well as regional situation and international political landscape. The two sides agreed on the importance of China-Pakistan All-weather Strategic Cooperative Partnership amidst the emerging global challenges. The meetings were marked by traditional warmth, mutual strategic trust and commonality of views.

The statement stated that the leaders reaffirmed that close strategic ties and profound friendship between China and Pakistan is time-tested and resilient. Pakistan-China friendship is a historic choice of both peoples that serves the interests of the two countries. The Chinese side reiterated that relations with Pakistan will always be given the highest priority in its foreign policy. The Pakistani side underscored that Pakistan-China relationship is the cornerstone of its foreign policy and that the Pakistani people always support the closest friendship between the two countries.

The statement further said that both the sides reiterated their mutual support on issues concerning each other’s core interests. The Pakistani side expressed its commitment to the one-China Policy and support on issues of Taiwan, South China Sea, Hong Kong, Xinjiang and Tibet.

The Chinese side reaffirmed its support for Pakistan’s sovereignty, territorial integrity, security, and promoting its socio-economic development and prosperity.

The Chinese side reiterated that relations with Pakistan will always be given the highest priority in its foreign policy.

The Pakistani side underscored that Pakistan-China relationship is the cornerstone of its foreign policy and that the Pakistani people always support the closest friendship between the two countries.

The Chinese leadership expressed condolences and sympathies on recent loss of life and property as a result of the unprecedented floods in Pakistan.

Prime Minister Shehbaz Sharif expressed appreciation for the timely and generous assistance extended by the government and people of China, including the provision of disaster relief supplies, the contributions of Chinese expert teams on post-disaster assessment and health care to assist with damage assessment, experience sharing in post-disaster reconstruction and rehabilitation, and post-disaster disease response to step up capacity of medical treatment.

The two sides noted the key role of various bilateral cooperation mechanisms for deepening strategic communication and welcomed the holding of the Spokespersons Dialogue and the Consultations on Arms Control and Disarmament.

Prime Minister Shehbaz Sharif reaffirmed his Government’s willingness to commit to high quality development of the Belt and Road Initiative (BRI) and highlighted the salience of the China-Pakistan Economic Corridor (CPEC), a flagship project under BRI, to Pakistan’s economic and social development.

Recognizing that ML-1 is a project of key significance under the CPEC framework and of importance to Pakistan’s socio-economic development, the two sides agreed to build upon the leadership consensus and to advance the process of its earliest implementation. They also agreed to actively advance the Karachi Circular Railway, which was an urgent requirement for Pakistan’s biggest city.

Recognizing the significance of the Gwadar port as the leading project of CPEC and an important node in cross regional connectivity, both sides expressed satisfaction on the completion of key projects and agreed to speed up progress on other related projects of the Gwadar port and free zone.

About the CPEC, both sides expressed their strong determination to counter all threats and designs against mega billon project and Pakistan-China friendship. Pakistan reaffirmed its commitment to the safety and security of all Chinese personnel, projects and institutions in Pakistan.

The two sides agreed to fully leverage overland trade and exchanges by upgrading facilities at Khunjerab border port and strengthening cooperation on epidemic containment and customs clearance in border areas. They also agreed to work together to further strengthen the implementation of the Quadrilateral Traffic in Transit Agreement which is an important pillar of regional connectivity.

Acknowledging the massive size of China’s e-commerce market and its potential to further bolster bilateral trade, the two sides welcomed the signing of an MOU on e-commerce and jointly supported the establishment of Pakistan’s country pavilions on China’s e-commerce platforms.

The two sides further welcomed the decision to celebrate Pakistan-China Year of Tourism Exchanges in 2023 and the organization of a Gandhara Art Exhibition at the Palace Museum in Beijing in 2022-2023.

On Kashmir issue, the two sides reiterated that a peaceful and prosperous South Asia is in the common interest of all parties. They emphasized the importance of resolving all outstanding disputes through sincere dialogue. The Pakistani side briefed the Chinese side on the situation in Jammu and Kashmir. The Chinese side reiterated that the Kashmir issue was a dispute left from history that should be properly and peacefully resolved based on the UN Charter, relevant UN Security Council resolutions and bilateral agreements.

On Afghanistan, the two sides agreed that a peaceful, prosperous, interconnected and stable Afghanistan is fundamental to regional prosperity and progress. They expressed satisfaction with the outcome of the three Foreign Ministers’ meetings of the six neighbouring countries of Afghanistan and looked forward to the next meeting to be held in Uzbekistan.

The two sides underlined to further strengthen coordination and collaboration within the framework of the Shanghai Cooperation Organization (SCO), and jointly push for deeper SCO cooperation across the political, security, business, connectivity and people-to-people fields, so as to better serve the common interests of regional countries, and make greater contributions to safeguarding regional peace and stability, promoting prosperity and development, and improving global governance.

Regarding floods in Pakistan, the two sides recognized that the recent floods are closely linked to the adverse impact of climatic change for which developing countries bear little responsibility but are subject to a disproportionate impact. The two sides called on developed countries to fulfil their commitments, take the lead in emissions reduction to ensure the development rights and space for developing countries, and provide adequate climate financing to developing countries.

During his meeting with the President of China Xi Jinping, Prime Minister Shehbaz Sharif felicitated him on his re-election as General Secretary of the Central Committee of the Communist Party of China (CPC), expressed admiration for his leadership, wisdom, vision and people-centered philosophy of development, and commended his contributions to continued growth of Pakistan-China relations.