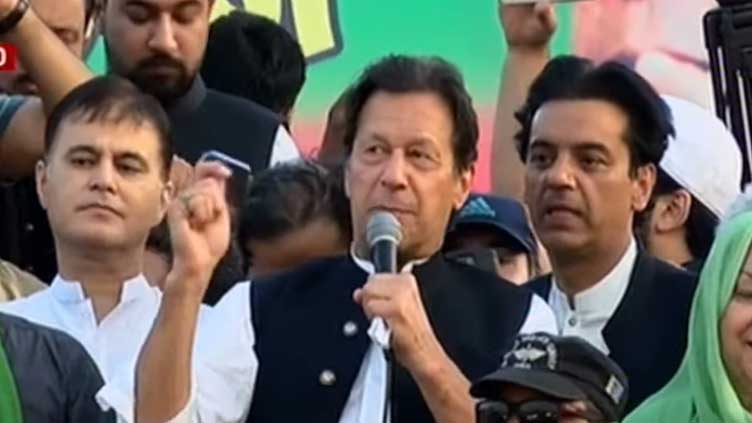 GAKHAR MANDI (Dunya News) - Pakistan Tehreek-e-Insaf (PTI) Chairman and former prime minister Imran Khan on Wednesday expressed his concern over hindrance in elections, saying that if it has been decided to remain neutral and apolitical, so why the institutions delaying holding transparent elections.

Taking a dig at the incumbent government, Imran claimed that the leaders of the coalition government have taken the NRO by plundering billions of rupees. Reiterating that actual freedom would only come when justice is delivered to the people of the country, Imran added that to ‘break the shackles of the slavery’, it is very important that the system of justice prevails in the country.

Slamming the rulers and allies of the government – PM Shehbaz, Interior Minister Rana Sanaullah, Asif Ali Zardari and Hamza Shehbaz – Imran went on to say that Shehbaz and his son [Hamza] were about to be indicted, when Shehbaz was allowed to become the Prime Minister, while Asif Ali Zardari’s case was also ended.

Warning the incumbent government, the PTI chief said that it would be the big make of it [coalition government], that the PTI long march would be ended in Islamabad as his movement will continue to move forward, unless the elections are held.

- Imran says those who are controlling NAB foisted thieves on country -

The PTI chief and former prime minister Imran Khan said that those who are controlling the National Accountability Bureau (NAB) have imposed thieves on the country.

Addressing the participants of the long march, the former premier [Imran] went on to criticize the incumbent government, saying that the cases of their leaders have been ended. Lashing out at the Pakistan Muslim League – Nawaz (PML-N) bigwigs – PM Shehbaz Sharif, Nawaz Sharif, Maryam Nawaz and Hamza Shehbaz – Imran said that, Shehbaz, Maryam and Hamza cases have been finished, while he [Nawaz] is all set to make his way back to the country.

Continuing to take a dig at the coalition government, the PTI chief said that it [government] has rolled out a law that encourages to arrest the small thieves, but sparing the big looters and allowing them to plunder the nation’s money and stash it in foreign accounts.

Imran kept on slamming the government – now in terms of inflation – quetsionong that what made it [government] to increase the prices of POL products, power and other commodities so significantly.