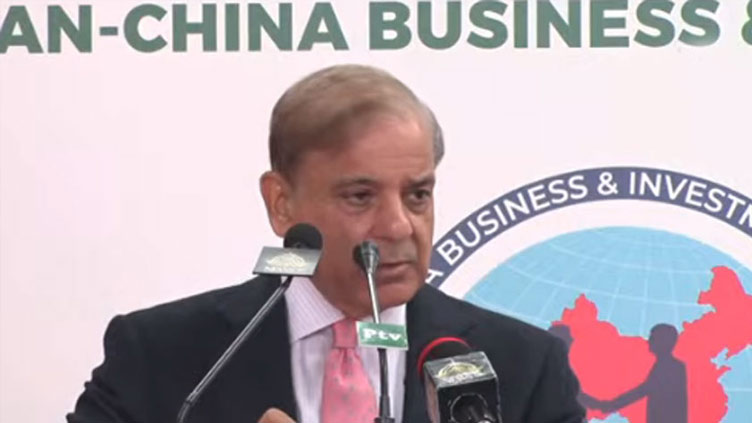 Addressing the first meeting of Pakistan China Business and Investment Forum in Islamabad on Monday, he said we need to double our efforts to connect with the Chinese business houses and create an enabling environment to attract Chinese investments.

The Prime Minister was confident that his visit to China and his meetings with the Chinese leadership there will be helpful in accomplishing these targets as well as promote our strategic and cultural relations.

The Prime Minister said he strongly believes that the CPEC has been a game changer in building our business relations and so far billions of dollars of investment has already been committed by the Chinese Companies. He recalled that Pakistan was able to address the issue of load shedding due to the energy projects completed under the CPEC.

Shehbaz Sharif noted that given our comparatively cheaper labor, relocation of Chinese industries to Pakistan by establishing Special Economic Zones will be a win-win situation for the businesses of both the countries.

The Prime Minister said Pakistan can enhance its agriculture yield by taking advantage of the Chinese modern technology and techniques. He said we can then install agro based industrial houses and export agriculture production to the Middle East and other countries.

The Prime Minister thanked the Chinese government and companies for their valuable support to the flood-affected people of Pakistan. He said China is at the moment one of the largest donors to the flood victims. China created an air bridge between Beijing and Islamabad, sending important items such as food and tents. He said the way Chinese companies and individuals contributed in a big way in the flood relief show the depth and strength of this friendship.

In his remarks, Minister for Planning and Development Ahsan Iqbal said Pakistan wants to enhance partnership with China to bolster its exports and become part of its global supply chains. He said the government is committed to removing all the bottlenecks which can stand in the way of attracting investment in the country.

The Minister for Planning and Development said Pakistan China Business and Investment Forum has to lay the path that bulk of the Chinese investment starts flowing into Pakistan.

Minister for Board of Investment Salik Hussain said his department is leading the phase two of industrial cooperation under the CPEC which envisages establishment of SEZs and fostering business to business cooperation.

He said we have also drafted a pitchbook of investment projects ready for investment in Pakistan and this will be presented to the Chinese side during the Prime Minister’s visit to Beijing.

Referring to Chinese investments in different projects, the Ambassador said a Chinese company is constructing a textile industrial zone on one hundred and fifty acre of land in Lahore with total investment of one hundred and fifty million dollars. He said this will achieve an annual foreign exchange income of four hundred million dollars and provide twenty thousand jobs.

The Chinese Ambassador said his country has so far donated six hundred and forty four million RMB for the help of flood victims in Pakistan.

Nong Rong said during the visit of Prime Minister Shehbaz Sharif to Beijing, the Chinese side will announce further assistance in this regard to help Pakistan overcome the difficulties posed by the floods.