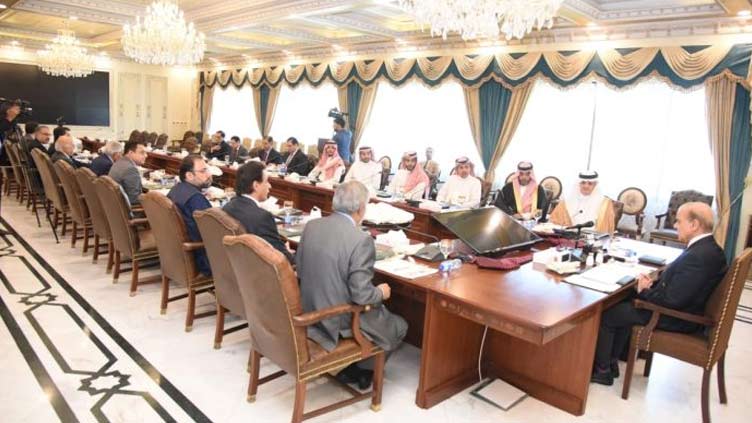 ISLAMABAD (Dunya News) – Prime Minister Shehbaz Sharif on Thursday appreciated his cabinet members for removing the impediments in the development projects of the Saudi Development Fund within 48 hours.

The prime minister, chairing a review meeting to discuss the SDF projects facing delay, said the pace and dedication showed by the cabinet members and relevant officers should be followed in future as well.

The meeting was told that the all departments concerned had fulfilled the requirements to remove obstacles in the projects.

The prime minister said the unnecessary delay in SDF funds had inflicted huge loss to the country which necessitated swift pace and dedication to overcome the deficiency.

During the detailed briefing on the progress of SDF projects, it was told that the formalities regarding Mohmand Dam Project, Jagran IV project, Shonter Hydropower Project and Gravity Flow Water Mansehra Project had been completed and the agreements in this regard would be signed soon.

It was told that PC-1 for the construction of a section of Neelum Valley Road in Azad Jammu and Kashmir and two tunnels had been completed.

The participants were told that all matters regarding the rehabilitation of quake-hit Abbotabad and AJK areas had been settled between SDF, Earthquake Reconstruction and Rehabilitation Authority, Federal Board of Revenue and Accountant General of Pakistan. Moreover, the construction of Shah Salman Hospital in Tarlai area of Islamabad was also in progress.

As urged by the prime minister, the Saudi delegation showed interest in investing in solar energy sector and fund the Diamer Bhasha Dam.

During the meeting with the delegation on October 17, the prime minister had taken strict notice of delay in projects and directed the authorities concerned to submit a report within a week, prior to the departure of the delegation.

The prime minister told the meeting that Saudi Arabia always stood with Pakistan and extended unconditional support and assistance on all fronts including foreign affairs.

He said the Kingdom also assisted Pakistan to overcome the economic issues including for repayment of debts and making investment.

The prime minister said the prosperity and security of Saudi Arabia were those of Pakistan. Pakistan would continue to supporting the Kingdom for the purpose.