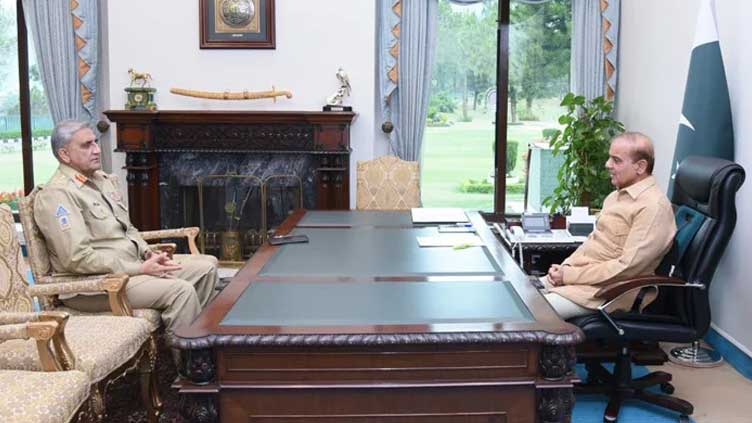 ISLAMABAD (Dunya News) – Prime Minister Shehbaz Sharif said on Friday that the terrorism won’t be allowed to again flourish in the country.

The Prime Minister presided over an important meeting regarding the security situation of the country. Chief of Army Staff (COAS) General Qamar Javed Bajwa and heads of intelligence agencies also participated in the meeting.

According to the sources, the defense minister, interior minister, foreign affairs ministers also participated during the national security meeting.

Sources said that the situation of Swat and the issues related to negotiations with the banned Tehreek-e-Taliban were discussed in detail in the meeting and the security agencies presented their recommendations in the meeting.

According to sources, another meeting was held with PM Shahbaz in chair. The Army Chief, DG ISI Lt. Gen. Nadeem Anjum and Corps Commander Peshawar participated in the meeting.

Earlier, PM Shehbaz and COAS Gen Bajwa held a one-on-one meeting and discussed matters pertaining to national and internal security were discussed in detail while the overall peace and order situation of the country was also discussed.

During the security meeting, a briefing was given on the law and order situation in Khyber Pakhtunkhwa.

On the occasion, Shehbaz Sharif said that terrorism will not be allowed to flourish again, peace was restored in the country with great sacrifices and the sacrifices of the security forces in ending terrorism are unparalleled. The sacrifices of security personnel and people cannot be forgotten.