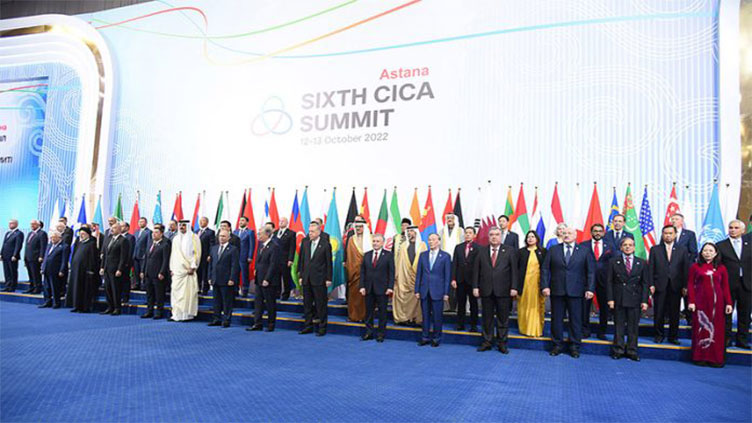 ISLAMABAD (Dunya News) - Prime Minister Muhammad Shehbaz Sharif participated in the 6th Summit of the Conference on Interaction and Confidence Building Measures in Asia (CICA) held in Astana, Kazakhstan on 13 October 2022 and held important meetings with the regional leaders.

According to the Foreign Office, during the plenary proceedings, the Prime Minister, inter alia, made a statement articulating Pakistan’s key priorities and perspectives on a host of issues. Pakistan’s commitment to the principles and purposes of CICA was reaffirmed.

On the sidelines of the Summit, the Prime Minister held bilateral meetings with the Presidents of Azerbaijan, Belarus, Kazakhstan, Tajikistan and Uzbekistan, besides interaction with other leaders.

More than a dozen heads of state and government, Vice Presidents of China and Vietnam and many Ministers participated in the Summit, coinciding with the 30th-anniversary celebrations of CICA. Deliberations emphasized the important issues of cooperation, key priorities and activities of CICA.

A number of decisions and outcome documents, including Astana Statement on CICA Transformation, were approved during the event. CICA Member States also expressed solidarity with the people and Government of Pakistan facing the unprecedented climate-induced floods and called for supporting Pakistan’s ongoing efforts for relief assistance and the subsequent phase of rehabilitation and reconstruction.

Participation in the CICA Summit provided an important opportunity to present Pakistan’s point of view on important national, regional and global issues. Prime Minister’s engagements with the world leaders gathered in Astana also served to further strengthen bilateral relations with these countries.