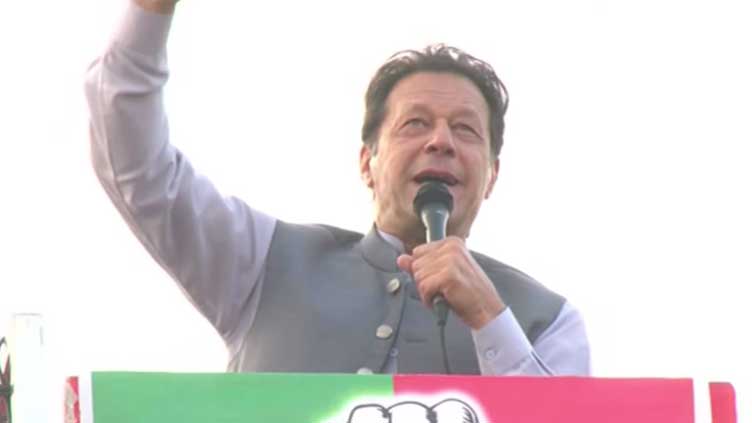 MARDAN (Dunya News) – Former prime minister and Pakistan Tehreek-e-Insaf (PTI) chairman Imran Khan has said that his government had taken control of terrorism and the borders were under the control of the federal government and terrorism shouldn’t be tolerated in Swat and tribal areas.

Addressing charged crowd in Mardan on Thursday, he asked why are the terrorists being allowed to enter when the people of Swat and tribal areas have rendered matchless sacrifices.

Imran Khan said that the thieves have pushed the country into quagmire and they have further indebted the nation.

The PTI chairman went on to say one of the biggest reason for the poverty in the country is that the rulers have plundered country’s wealth and asked the people to vote for Nawaz Sharif and Asif Zardari if they [people] think they [Nawaz and Zardari] are honest.

The former PM while declaring the Election Commissioner a dishonest man said that they [opponents] will cast 10 to 15,000 fake votes and we still have to defeat them. He urged the people to start door to door campaign and convey PTI’s message.

“I was in power for three and a half years and I challenge anyone to prove even my theft,” Imran Khan said and asked to look at his three-and-a-half-year record.

On Wednesday, while addressing a rally in Sharaqpur, former PM said that the rulers appoint NAB and FIA heads to save them instead of eliminating corruption, while four witnesses of Prime Minister Shehbaz Sharif and Hamza Shahbaz have already died.

He said that the incumbent rulers would never let the institutions strengthen. “I have never favoured anyone during the three and a half years of my government,” he said and added “neither I want judges nor army chief of my choice but want to bring people to office on merit who will strengthen the institutions.”

He hoped that the people of Sharaqpur will again vote for the PTI candidate in the upcoming by-election, adding that this election is part of Pakistan’s “Haqiqi Azadi” because culprits have been imposed in the country who plundered country’s wealth.

Earlier, Imran Khan, while addressing a ceremony in the federal capital, said that what would be worse for the country than Sharif’s getting another NRO.

The PTI Chairman said that if he had stacked money abroad, he would not have the courage to say "absolutely not".

Criticizing government policies, Imran Khan said that a slowdown in the economy will result in more unemployment and it will become more difficult for the salaried class to make their ends meet.

Earlier, speaking to reporters outside the IHC, Imran Khan said that the PTI was the only party that practised "legal political fundraising" and termed the funding raised by other political parties "bogus".

He also accused Chief Election Commissioner Sikandar Sultan Raja of not bringing to light the funding details of other parties. "He is like their family member and a biased man," Imran alleged.

On the other, talking to journalists, the former PM said that admitted that he did not enjoy absolute power as PM because the actual centre of power in the country lay elsewhere.

Imran Khan said that in the 60s, the world used to give the example of Pakistan because our country was competing with Singapore. He added that the rule of law makes a difference. The size of the country’s Northern Areas in the Rule of Law Index is double that of Switzerland, adding that the most prosperous country in the world as it ranks ninety-nine in the Rule of Law Index, Imran said.

"When I was the prime minister, I did not enjoy absolute power because the actual centre of power in the country lay elsewhere, and everyone knows where that is," Imran added.