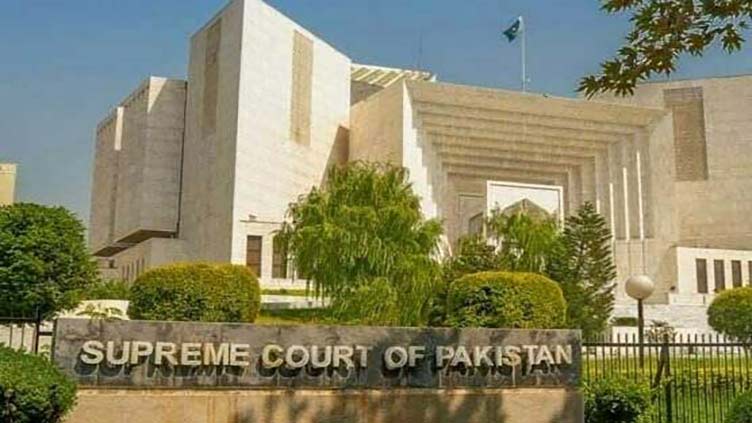 ISLAMABAD (Dunya News) - The Supreme Court (SC) has sought records of all high-profile cases from 1999 to June 2022 from the National Accountability Bureau (NAB) on a petition filed by Pakistan Tehreek-Insaf (PTI) Chairman Imran Khan.

A hearing on Tuesday held in the Supreme Court on Imran Khan’s petition against the NAB amendments. PTI lawyer Khawaja Haris opined that the change in the NAB Act has made the definition of ‘benamidar’ very difficult and the issue is the involvement of important political leaders in corruption. When it comes to public funds, the issue falls under the category of fundamental rights. At the outset of the hearing, Justice Shah asked, "On the basis of which constitutional provision should the law be declared null and void.

Chief Justice Umar Atta Bandial pointed out that it is not the role of the Supreme Court to investigate economic policies and if any crime has been committed by anyone, the law has an open trial process.

Subsequently, Haris said, "I am taking back my words regarding economic policies."

The court remarked that if it does not happen, then the whole case should be closed and later it will be found that there was no question of fundamental rights, which fundamental right has been violated by NAB amendments? Suppose Parliament has set a limit, if there is so much corruption, then NAB will see it. The question is how have the rights of ordinary citizens been affected?
In his response, Haris said that people with pending cases were the real beneficiaries of the new laws.

The PTI lawyer argued that on the issues pertaining to public money, the court can declare the legislation invalid.

Justice Ijaz-ul-Ahsan remarked, “Have the NAB amendments deliberately created loopholes in the law? And have the NAB changes been made to favour certain sections? 280 cases of corruption worth billions of rupees have already been returned.”

Justice Mansoor Ali Shah asked the PTI lawyer if they are planning to harm the Parliament.

The Chief Justice said, "There are different mafia in Pakistan, they are violent or not but I don’t want to mention any mafia."
He said all these points are political in nature and need to be decided by Parliament while accountability is important for a healthy society and a healthy state. Corruption is everywhere in the world but there are some loopholes in the NAB amendments, and the flaw is that some officials have been acquitted after serving jail terms and some businessmen are also disappointed with NAB.

The Chief Justice noted, "There are some things in the NAB changes that have benefited, but we need to strike a balance. There are some amendments which are serious in nature such as plea bargain and setting a limit of Rs500 million, which favoured the accused.

Later, the court asked for a record of how many corruption cases, in which the sentences were upheld by the Supreme Court. The court adjourned the hearing till tomorrow, asking for the records of all high-profile cases from NAB from 1999 to June 2022.