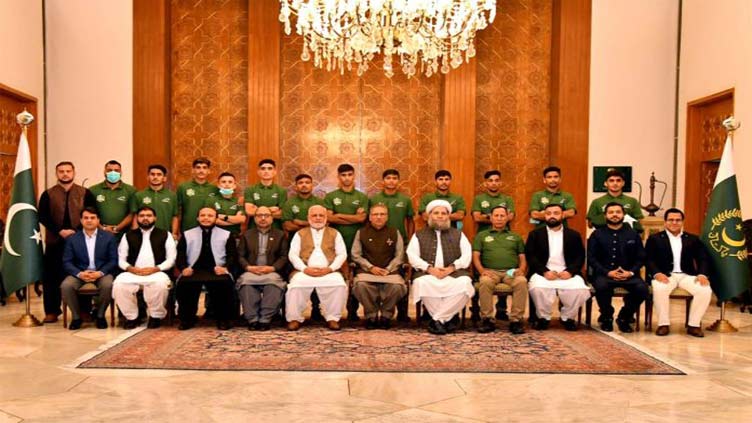 ISLAMABAD (APP) - President Dr Arif Alvi on Wednesday said that bringing street children and over 20 million out-of-school children into the formal education stream was of paramount importance for converting them into valuable and productive human resource.

The president made these remarks while talking to the Under-16 Street Children team that would be representing Pakistan in the Street Children World Cup, Qatar 2022 and the officials of Muslim Hands at Aiwan-e-Sadr.

The president appreciated the initiative of Muslim Hands for helping unprivileged children by involving them in healthy and constructive activities and giving them proper training, education, social and communication skills, confidence and the opportunity to compete at the international level in football tournaments.

While appreciating the achievements of the team, he said that such steps must also be taken for the promotion of other games like hockey and kabaddi.

He said although the government was taking various steps to engage underprivileged children in healthy activities which required support of the private sector, NGO’s and civil society.

He emphasized the need for creating enabling environment for unprivileged children by providing them with education, training and necessary skill so that they could realize their full potential.

The president advised that Pakistan Sports Board should engage street children in sports to build their character and confidence and provide them training to become world class players.

He said that Pakistan was a sport-loving nation and football was equally popular in every nook and corner of the country.

He emphasized that the promotion of sports could help youth in reducing stress and leading a healthy life.

He said that 60 per cent of the population of the country comprised of youth and they must be equipped with the latest IT tools and training.

The president also called upon the Pakistan Football Federation to set aside their petty differences and inter-federation rivalries and to focus on the development of the game, starting from grass root level and engaging as many young players as possible from across the country, especially the underprivileged children.

He said that it would help the country in the development of sports ecosystem which would eventually produce world-class players.

Earlier, while briefing the president, Raja Arsalan Nusrat Director Muslims Hands, UK Chapter said that over 1000 children in more than 15 communities across Pakistan were engaged in the sports activities under “Child’s Right to Play” slogan.

He apprised that the Football team comprising of street children would participate in street Child Football World Cup going to be held in Qatar Doha.

The president also handed over National Flag to the team captain.