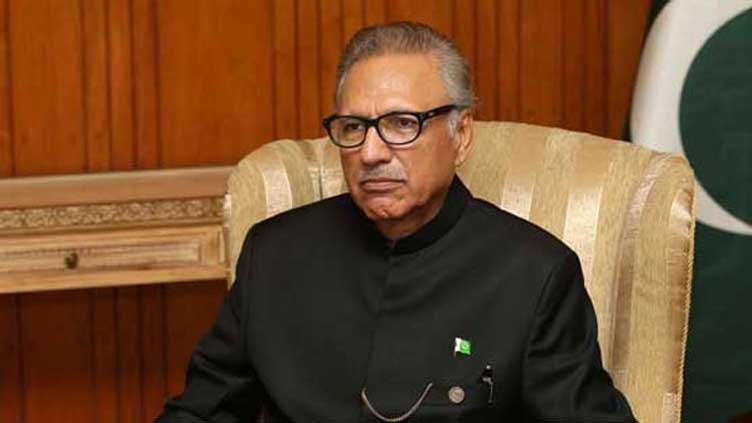 ISLAMABAD (Dunya News) - President Dr Arif Alvi on Saturday awarded the major penalty of dismissal from service to the Director General of the Pakistan Electronic Media Regulatory Authority (PEMRA) and also enhanced the fine from Rs2 million to Rs2.5 million.

He held that it had been established beyond any reasonable doubt that the female employee had been harassed by the accused with verbal, vulgar, sexual, and demeaning comments and demands by the appellant (DG).

The president held the decision of the Federal Ombudsperson for Protection against Harassment of Women at the Workplace (FOSPAH).

The president observed that he took a strong exception and used the full force of the law when such matters were brought to light and were proven beyond doubt to ensure a safe working environment for the female gender.

This, he said, was aimed at unleashing their great economic potential, which remained unexploited due to their fear of harassment at the workplace.

The president also ordered that the amount of compensation be recovered from the appellant’s arrears of pay (if any), pension emoluments, or any other source (property) under Section 4(i)(d) of the Protection Against Harassment of Women at Workplace Act 2010 and paid to the complainant as compensation for the hardships she endured at the hands of the appellant.

"This landmark decision was announced after the President gave personal prolonged hearings to the accused, the complainant and their counsels on 22.07.2022 and 25.07.2022, besides factoring in the evidence and recording the statements of the witnesses on record and minutely perusing the entire proceedings of the case," President’s Secretariat Press Wing said in a press release.

In his decision, the president noted that the accused continued harassing the complainant unabated even during the proceedings of the case by FOSPAH, in his suspension period, by filing applications against the complainant to IG Police, Islamabad, and to DG (FIA), Cyber Crime Wing, Islamabad, thus, inflicting grave mental torture on the complainant and putting her repute at stake.

He said that the act of the accused was a flagrant violation of the laws of Pakistan, particularly the Protection Against Harassment of Women at Workplace Act 2010, and a blatant example of how women were discouraged, even those brave ones who come forward risking their reputation, to file cases of harassment.

"The statistics with reference to the number of cases are infinitesimal as compared to the anecdotal discussion of the frequency of harassment in our society", he added.

In his order, the president wrote that women, who made up more than 50% of our society, were unable to work freely because of possible harassment.

"Public spaces are reduced for them; educational opportunities, which are their right have been denied to them by their parents in certain cases because of the fear of harassment at the educational institutions as they look for "girls/women only institutions." As a result, women in our society are mostly undereducated, severely underemployed, financially constrained, denied proper inheritance and discriminated against at the time of promotions," the president observed.

He said that Islam kept women in high esteem and provided them with the right to pursue gainful occupations and employment by ensuring a safe, secure, dignified and respectful workplace environment.

He said that due to these reasons, Bibi Khadija (RA), the wife of the Prophet (Peace Be Upon Him), was a businesswoman and Hazrat Umar (RA) appointed Al-Shifa’ bint Abdullah as the custodian of the market who was entrusted with the portfolio of the Accountability Court and Market Administration.

The president further said that Hazrat Umm-e-Kulsum bint Ali was sent on a diplomatic mission to the court of the Queen of Rome and many women took part in battles including Hazrat Ayesha (RA), Umm-e-Salim (RA), Umm-e-Ammara (RA) and Umm-e-Saleet, Safiyya bint Abd al-Muttalib, Umm-e-Atiya al-Ansar (RA) Rufaida Al-Aslamia and Asma bint Yazid ibn Al-Sakan, who protected the Prophet (PBUH) in battles, treated the wounded soldiers, provided them with water and food.

The president also quoted a recent judgement of the Supreme Court in a case of harassment wherein it was noted, "It is time to pave the way towards the actualization of robust and unwavering constitutional ideals and values by embracing the participation of women in all spheres of life with honour and dignity", and that "No nation can rise to the height of glory," in the words of the Founder of our Nation, Muhammed Ali Jinnah, "unless your women are side by side with you. We are victims of evil customs. It is a crime against humanity that our women are shut up within the four walls of their houses as prisoners. There is no sanction anywhere for the deplorable condition in which our women have to live. "

Keeping in view the established facts of the case, the president directed the relevant authorities to implement the order in letter and spirit and furnish compliance to Registrar FOSPAH within the stipulated period.