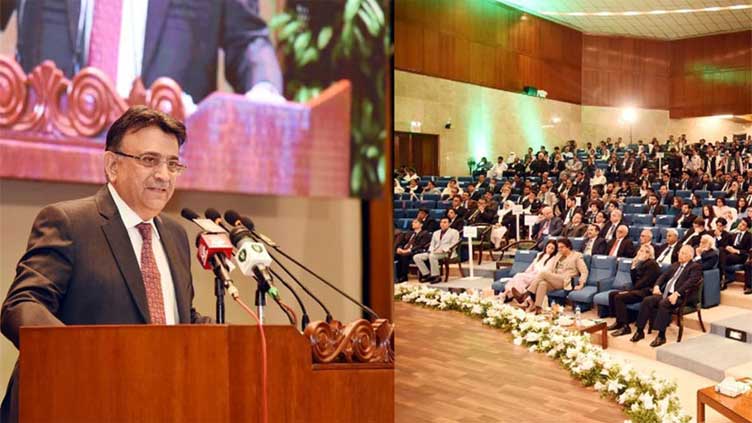 ISLAMABAD (Dunya News) - Chief Justice of Pakistan Justice Umar Ata Bandial on Saturday said the vision for a prosperous and progressive Pakistan is based on the rule of law and the supremacy of the constitution.

Addressing the concluding session of the 9th international judicial conference in Islamabad, he said the rule of law can be achieved, if courts are made equally accessible to the people of Pakistan irrespective of their gender, religion, race or economic status.

He said the court is committed to playing its part in helping to build Pakistan, which is equal for all. However, it can only be accomplished if all the institutions and people have regard for the constitution.

The Chief Justice said that the court is also committed to protecting the marginalised groups of society. He said the legislature and executive must also create the legal framework and implement the decisions of the court.

Highlighting the key recommendations made in the conference, he said Alternative Dispute Resolution can play a crucial role in ensuring the speedy dispensation of justice to the people. He said there is a need to develop ADR facilities and that courts and advocates should encourage litigants to use them.

The Chief Justice said the superior court should adopt a pro-enforcement approach in relation to foreign arbitral awards to boost foreign investment in the country.

Talking about the role of technology, he said the court is extensively deciding matters via video link and over three thousand matters have been decided through video link.

Justice Umar Ata Bandial said a National Judicial Automation Unit will be established to develop a national online dashboard for creating an integrated information system for all courts in the country. He said the first phase of this project will be running by December 31st of this year.

The Chief Justice said women should be included in decision-making and they need more participation in the bar and judiciary.

Shedding light on the growing threat of overpopulation and climate change, he said increasing population, worsening climate change and pervasive gender inequality are hindering the effective administration of justice.

He said problems of population growth and climate change should be addressed on a priority basis by state institutions, civil society and the people.

He said for capacity building, district judges should take part in training to learn about amendments and the development of the law. He said the Federal Judicial Academy will be conducting online workshops for all stakeholders in the justice sector.

Earlier, five thematic sessions were held, which discussed topics including the rule of law, administration of justice, global challenges, dispute settlement mechanisms, and digital advancement in the justice system.

Later, the Chief Justice distributed souvenirs among the speakers of the conference and certificates among the officers of the Law and Justice Commission, and Supreme Court of Pakistan.