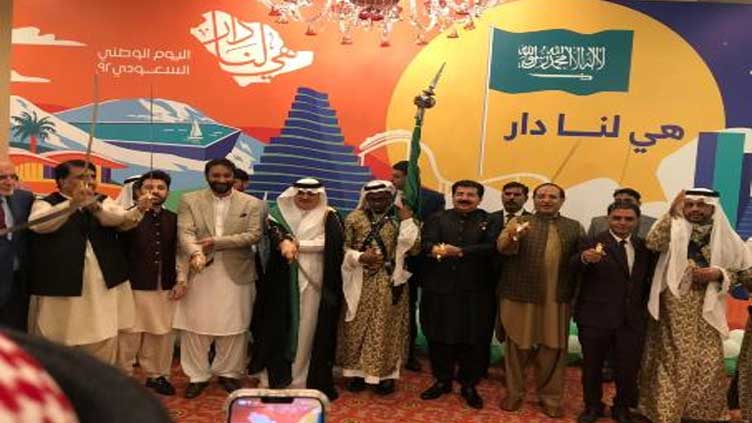 He expressed these views while addressing a ceremony to mark the National Day of the Kingdom of Saudi Arabia organised by the Saudi Embassy here in Islamabad.
He underlined that continued engagement and collaboration are required to achieve shared goals.

"It is a pleasure to be here with such distinguished friends and brothers from the Kingdom of Saudi Arabia. "After seeing the sentiments here, I can only imagine the wonderful celebrations back in your home country," he remarked.

Kingdom of Saudi Arabia, he said enjoys a very elevated position as the religious home of Muslims all around the world, as it is the sacred land of our beloved Prophet Muhammad (s.a.w), adding that Pakistan sincerely appreciates all the efforts of King Salman, to bring peace and prosperity to his people.

"Despite the disruption due to COVID-19, this year’s Hajj arrangements were unmatched, for which we have nothing but praise. I must also note here from my personal experience that Prince Muhammad Bin Salman, as a young visionary leader, has introduced remarkable new facilities for pilgrims through the use of IT and other innovations." said the Senate chairman.

While commending the role of Crown Prince, Muhammad Bin Salman, he said that he has always expressed very warm sentiments towards Pakistan. "He is a leader on a mission, whose progressive and modern ideas continue to inspire the youth," he added. His initiatives like the Misk Foundation, the multi-billion-dollar tech city of Neom, the E-sports strategy, and environmental efforts to combat climate change seem to only be the tip of the iceberg.

He thanked Saudi Arabia’s leadership for its timely support to Pakistan in helping the flood affected people of Pakistan.

The Chairman Senate appraised the gathering of the widespread destruction caused by the recent floods and the impending humanitarian crisis.

Saudi Arabia has so far sent five flights and 100 trucks for emergency relief, carrying over 950 tons of food and other relief items to 17 flood-ravaged districts of Pakistan. He appreciated the Saudi Ambassador for personally reaching out to flood affected people in far-flung areas. Lastly, the Chairman of the Senate wished the Royal Family and the people of Saudi Arabia prosperity, well-being, and success in all times to come.