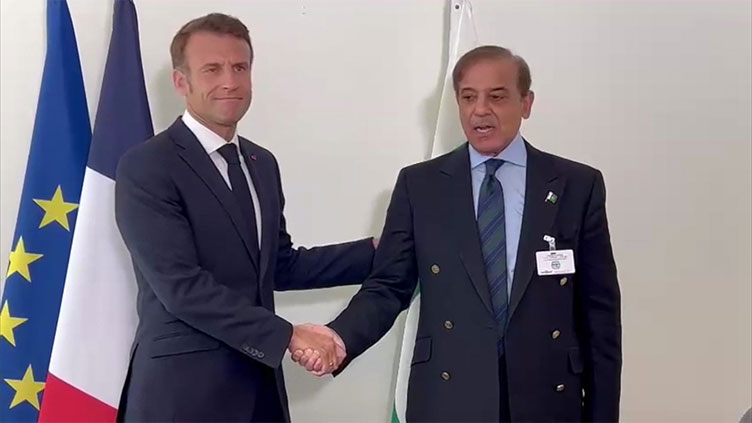 NEW YORK (Dunya News) - Prime Minister Shehbaz Sharif on Tuesday met French President Emmanuel Macron, and expressed gratitude for solidarity and support for the flood-affected people and for sending timely assistance of tents, water pumps and a team of doctors and nurses.

During the meeting held here on the sidelines of the 77th session of the United Nations General Assembly (UNGA), the prime minister hoped that France would also contribute to the government s efforts in the rehabilitation and reconstruction phase.

He apprised the French president of the devastation caused by the massive climate-induced floods across Pakistan and the government s steps to address the dire situation.

The prime minister added that despite having a negligible contribution to global carbon footprint, Pakistan was among the most vulnerable to its devastation as manifested in the unprecedented floods.

He stressed that climate change was a potential area of cooperation between the two countries and for collective global action.

Prime Minister Shehbaz reaffirmed the high importance Pakistan attached to its long-standing friendly relations with France, both bilaterally and in the context of European Union.

He stressed the importance of further strengthening the bilateral relations across a range of areas, including trade and investment, energy, agriculture, IT, defence and security, and higher education.

The prime minister also thanked France for its support for GSP+ scheme, noting that it served to enhance trade and economic ties with the European Union as well as France.

The two leaders agreed to closely work together to identify ways and means to support Pakistan in its efforts to come out of the formidable challenge and build back a resilient infrastructure with the help of international support.