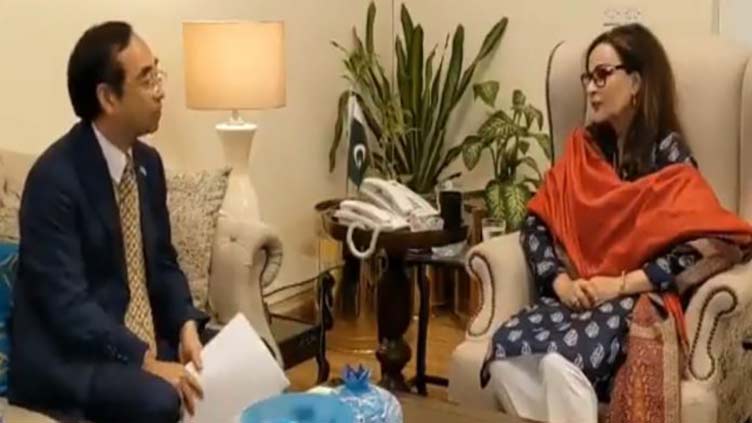 ISLAMABAD (Dunya News) - Federal Minister for Climate Change Senator Sherry Rehman on Friday met Japanese Ambassador Mitsuhiro Wada and apprised him of the devastation caused by the flash floods across the country, current relief efforts and the assistance required for rehabilitation and reconstruction.

Ambassador Mitsuhiro Wada expressed the sincerest condolences on behalf of the government and the people of Japan on the loss of precious lives and the severe devastation caused by the floods.

Sherry Rehman told the ambassador, “We are still receiving new data. Some 1,508 people have lost their lives and more than 12,000 are injured. Over 300 bridges have been torn apart and nearly 13,000 km of roads severely damaged, cutting off access to the areas drowned in flood waters.”

She said instant rescue and humanitarian relief had become an urgent task, as those who had survived, could not find dry land to pitch their tents.

“We had cascading climate events occurring one after the other since the start to the year, with temperatures reaching 53 degrees in Sindh followed by heatwaves and three times the normal amount of GLOFs,” she added.

Spread of diseases like cholera, dengue and others, she said, would exacerbate the health crisis among the affected population as 33 million people had been impacted severely.

The ambassador briefed the minister on the humanitarian assistance and conveyed the extension of Emergency Grant Aid of $ 7 million to Pakistan by the Government of Japan.

The minister expressed her gratitude to the ambassador and said, “We are extremely thankful to the people of Japan for extending their support and looking to support Pakistan in rebuilding as resilience will require more funds. Our aim is to build back better with climate resilient infrastructure and to address the looming food, livelihood and water insecurities that will arise once the waters recede.”