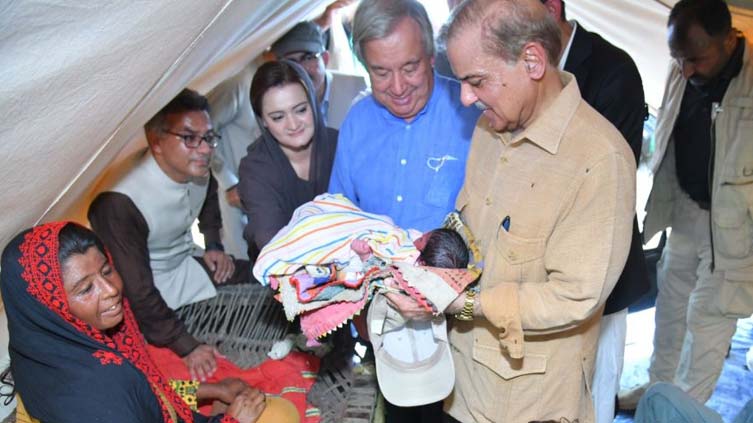 They also visited the school set up for the children of flood victims in Tent City Usta Muhammad.

He was talking to the United Nations Secretary-General Antonio Guterres during their visit to the flood-affected Tehsil Usta Muhammad in Jafarabad district of Balochistan.

He said that the relevant authorities faced huge difficulties to reach to the affected people in the remote areas of the province.

He informed that floods had badly affected the road and rail infrastructure besides, damaging bridges.

The prime minister said that the rehabilitation of the flood affectees is a major challenge and in order to deal with it the federal government is assisting the provinces.

He said that the province has its natural resources, and his government was focusing on the development of the province.

Balochistan Chief Minister Abdul Quddus Bizenjo informed the UN secretary general that they had utilized all the limited resources in the rescue, relief and rehabilitation efforts. He appealed to the global community to extend financial help to support the flood affectees of the country.

The Chief Secretary of Balochistan briefed the dignitaries about the devastation caused by the monsoon floods, and rescue, relief and rehabilitation efforts in the province.

They also visited the school set up for the children of flood victims in Tent City Usta Muhammad.

“It is not a matter of generosity, but a matter of justice,” he said reiterating the UN’s commitment, strong support and solidarity with the flood-affected populace of Pakistan.

Guterres said that huge damages and losses were caused to human lives and properties.

The UN absolutely supported the Pakistani nation and requested the well-resourced nations to support the country massively, so that it could face the future challenges of climatic changes and save its nation.

He stressed that the international community must realize the serious impacts of greenhouse emissions as nature was striking back in the form of natural calamities.

The issue of greenhouse gases had accelerated the climatic changes and the nations having larger greenhouse emissions footprints must understand these issues, he added.

According to the scientific estimates, the UN secretary-general emphasized that now, it was a time to reduce greenhouse emissions.

He said it was also a fact that they were living in a climatic changing era and have to make efforts to rebuild communities and to enable the countries to resist and face the future disasters that could be wrought by the natural calamities.

Sindh Chief Minister Syed Murad Ali Shah gave a detailed briefing over the damages and loss of lives in the province.

He said during the current monsoon season, different districts of the province had received unusual rainfall never witnessed in the past.

He said that 30 districts of the province were affected, displacing about 12 million, adding that a total of 578 people lost their lives. A total of 3 million houses were destroyed and crops grown on an area of about 3.3 million acres were damaged while 500,000 livestock had been swept away.

The chief minister said that Pakistan had been facing the impacts of global warming and climatic changes, adding that they required the international community’s financial support for the relief, rehabilitation and reconstruction efforts.

Ealier in the day, the prime minister along with UN secretary general and the federal ministers took an aerial review of the flood affected areas of the Sindh province.

Meanwhile, both the leaders will later visit Larkana where they will meet the people displaced by the floods.